Apple aims to make each update better than previously released. With the arrival of iOS 12, users can take advantage of many features that have made it much easier to use their iOS devices. Several features are simple to find compared to others. Below we show you a list of 5 new tricks you can do with the new Californian company update. We also advise you to read the guide on how to activate dark mode on iOS 12.

Table of contents: show
1 1. Set a time limit on an application
2 2. Additional battery information
3 3. Temporarily enable the do not disturb mode
4 4. Add the QR code link in the Control Center
5 5. Self-destruction notes
5.1 Conclusion

1. Set a time limit on an application

Admit it, spend a lot of time on Instagram and you know at the bottom that it’s time to reduce the time of use. iOS 12 has introduced a Screen Time function that allows decreasing the time of use of any application on the device.

To use the feature, go to Settings – Screen Time – App Limits – Added Limit – Choose App – Add – Set Time Limit. The time limit chosen will be shown at the top right of the Time box and scrolling up or down, you can adjust the time and minutes according to your needs.

You will also see a Customize days option. This will allow you to apply the time limit only for the days you want. For example, if you want your children to use certain applications for an exact time during the day of the week, touch those days and the clock will appear automatically.

With the new operating system from Apple, you have more info than before, such as charts and faults, for the last 24 hours or last week. Below the graphs, you will also see how long the phone has been on or off. This is also a very useful function because you know if you have used too much your iPhone or iPad.

3. Temporarily enable the do not disturb mode 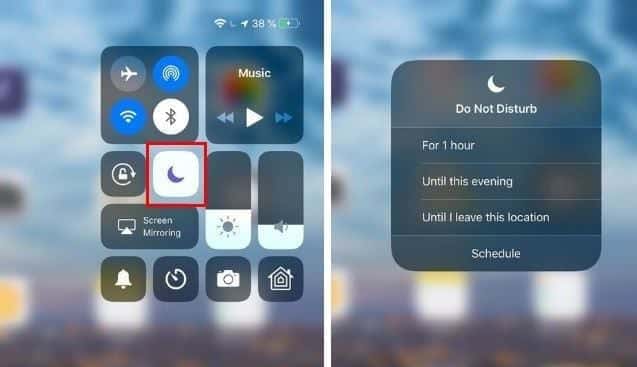 To set the do not disturb mode on your iOS device, scroll down from the top right of the screen – this will open the Control center – and press the moon icon for a few seconds. Depending on your location, state, and what time it is, you will see several options.

You will get options like “Until this evening/afternoon/morning”, “Until the end of this event”, “For an hour” and “Until you leave a precise position”, but obviously according to your situation, you will see also other different options.

4. Add the QR code link in the Control Center

The shortcut for the QR code will not be in the control center; you need to add it by going to Settings – Control Center – Other controls – Scan QR code. Scroll down from the top right of the screen and the QR code link will now be available.

If the various notes you take with the passing of the days accumulate because you keep saying that you will delete them later, but you will never do so for a short time, keep in mind that you can make them self-destruct after a lot of time. Go to Settings – Voice Memos – Delete Deleted – and select the amount of time you want to keep before removing them permanently.

The new features of iOS 12 are very interesting and we are sure that will satisfy even the most demanding user. It is hoped that with the next update of the Apple operating system there will be even more features so as to make it unique. What are the features you liked most of iOS 12? Let us know in the comments.