AGM X3 Turbo is a decent smartphone with beautiful body design and generous inbuilt memory. The handset also has an ample RAM with a powerful processor that will keep it fast and active. Below is the AGM X3 Turbo full specifications with the features and the price.

Table of contents: show
1 AGM X3 Turbo Key Features And Specs
2 Design And Display
3 Camera Features
4 Hardware And Software
5 Storage Capacity And Sensors
6 Network And Connectivity
7 Battery Power
8 Leagoo Z10 Full Technical Specifications
8.1 General
8.2 Network
8.3 Design
8.4 Display
8.5 Camera
8.6 Software
8.7 Hardware
8.8 Connectivity
8.9 Battery
8.10 Media
8.11 Other Features
8.11.1 ==> Disclaimer: Specifications, Features & Price Shown For The Above Device Was Entered Manually. We Can Not Guarantee That The Info On This Page Is 100% Correct. If You Think That Any Information For The Current Device Is Wrong Or Missing, Please Don’t Hesitate To Contact Us.
9 AGM X3 Turbo Price And Availability 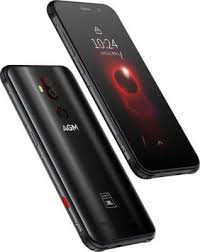 On the body, the AGM X3 Turbo packs a unique body design. The handset has a rugged body which will definitely survive many drops. It has a smooth panel that features a dual camera with an LED flash and a fingerprint sensor plus the branded logo. All are well arranged in a vertical order. Shifting to the front, it has a thick bezel both on the top and bottom of the screen. The dark screen, however, makes the bezels almost invisible.

The handset is built with the combination of Aluminum Alloy and glass and it’s available in Black color. It has body dimensions of 81.5 mm x 167.5 mm x 10.5 mm and weighs 216 gram. It also has IP68 certified making it both dust and water resistant. On the display, the AGM X3 Turbo has a screen size of 5.99 inches FHD+ under TFT capacitive touchscreen with a resolution of 2160 x 1080 Pixels and 403 PPI density. The screen comes with display protection and it has up to 68.05% Screen to body ratio.

The smartphone packs an impressive camera set-up both on the back and front. The rear camera consists of 12 Megapixels + 24 Megapixels paired with dual LED flash and other internal features as well. It’s capable of shooting 2160p@30fps, 1080p@960fps, 720p@960fps videos resolution respectively with f/1.8 Aperture. On the front for selfies, it has a front facing camera of 20 MP with Aperture F2.0, and Face Unlock as an added security feature. 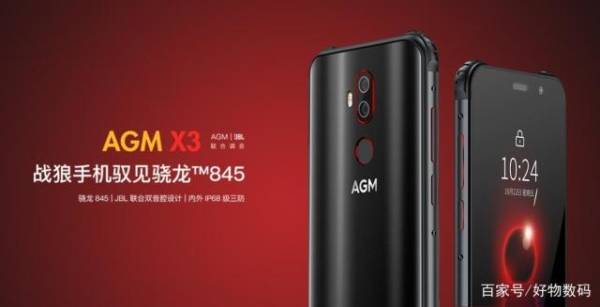 On the inside, the phone has a powerful Qualcomm Snapdragon 845 SDM845 SoC which handle it’s business at a fast speed of 2.8GHz octa-core processor with Adreno 630 GPU for gaming and other graphics related issues. It runs on Android 8.1 Oreo operating system with X OS 3.0 user interface on top.

Fueling the phone is a nonremovable battery capacity of 4100 mAh. The juicer has support for both fast and wireless charging technology. It also promises to last up to 320 hours of standby time and 15 hours of talk time when fully charged.

The AGM X3 Turbo official price is not yet available. However, the phone is expected to sell at a price of $320 and $289 respectively. It will be available on shopping stores from April 10.