Some months ago, rumours of a Blackberry smartphone with the code name Mercury surfaced along with that of two other smartphones from the same manufacturer, Blackberry Argon & Neon. The Neon and Argon have been released as the Blackberry DTEK50 & DTEK60 respectively, so it is only pertinent that information either in form of leaks or official releases begins to filter out concerning the Blackberry Mercury. 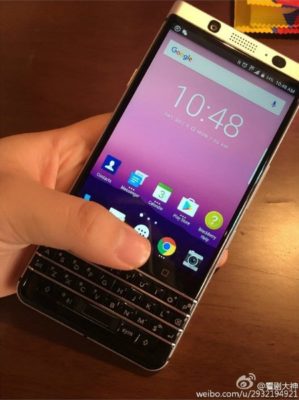 According to the info on ground, the Blackberry Mercury would have a physical keyboard under a 4.5-inch screen, and this has been confirmed by recent image leaks from China.

The Blackberry Mercury has a 4.5-inch display with a Full HD (1920 * 1080) pixel resolution. In the leaked images, only the screen of the smartphone seemed to have a dimension of 4.5 inches, so the 3:2 screen-to-body ratio seems to apply to the entirety of the smartphone. It also has a physical QWERTY keyboard.

A Snapdragon 625 processor with eight cores and a speed of 2GHz works in tandem with an Adreno 506 GPU to ensure that the smartphone runs smoothly at all times. It has 3GB of RAM and 32GB of internal memory which can be expanded via a microSD slot.

Blackberry smartphones are known for their quality cameras and the Blackberry Mercury doesn’t disappoint either, with an 18MP camera with LED flash at the rear and an 8MP camera at the front.

The Blackberry Mercury supports 4G VoLTE, packs a 3400mAh battery and runs on Android 6.0 Marshmallow out of the box.

The Blackberry Mercury is expected to be announced in the first quarter of next year, 2017. Then, we would know the final name of the device, though there is a high probability of it being named Blackberry DTEK70 since the last two Blackberry smartphones are named DTEK50 and DTEK60. The device in the leaked images looks like it is coated in Gold colour.