Blackview is the epitome of super-resistant phones. So when you think Blackview, think phones that can withstand any condition no matter how unfavorable or extreme it could be. Yet, as far as I can see in this new Blackview BV6100, the company is discreet about the phone design, for rugged smartphone, this new mobile device is a great design, yet it comes with incredible resistance. The phone has been released in the month of July 2019. Let us learn more about this phone by checking out the full technical specification below.

Once you receive your Blackview BV6100 package box, if it has not been tampered with you will find the following inside the box- the phone itself, (it is most likely to be black) one charger, one earphone, one English manual, one screen protector, one SIM needle, and one USB cable. If any of these are missing, someone may have tampered with the contents inside the box.

This phone is reinforced with plastic body design and it comes as a waterproof mobile device, secured with fingerprint sensor. There is only one color for the phone and that is black. When you look at the display, you find IPS capacitive touchscreen. The screen size is 6.88 inches, which is good for gaming and watching movies. Yet, the pixels resolution in the display is poor as it stands at 1520 x 720 and the pixel density is 244 ppi. There’s also 2.5D curved screen glass for display protection. This is the largest screen smartphone for now.

I was quick to notice that there are three cameras in the Blackview BV6100. Also, the dual rear camera in the Blackview BV6100 are 8 MP and 5 MP. Image quality of 3284 x 2448 can be produced from the camera. Video resolution of 1080p is also available. Features of auto focus, continuous shooting, HDR, and many other can be found on the smartphone camera department. Following that, 8 MP is situated at the front for selfies. It comes with f/2.8 aperture. 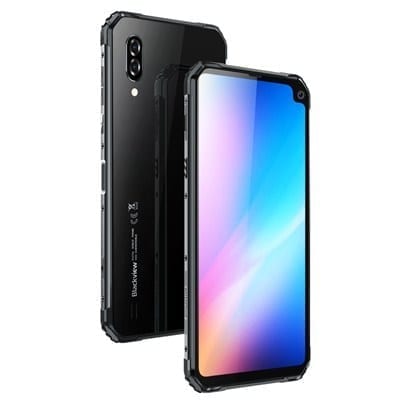 Blackview BV6100 runs on Android 9.0 Pie modified user interface. This is fortified with MediaTek MT6771 Helio A22 MT6761 chipset with 12 nm technology and 64-bit architecture. There is also the CPU Octa core 2.0 Cortex A53, while the GPU is PowerVR GE8300. Nothing new in new lease of life for optimum speed except that the chipset is Helio A22.

Blackview BV6100 is rich with 3GB of RAM which cannot be expanded but the internal storage of 16GB can be boosted externally with a microSD card that can be slotted, not in a dedicated slot, IM 2 slot, to boost it up to 256GB. Yet, this is a kind of injustice for a phone that arrives with 3GB of RAM.  Sensors are fingerprint, accelerometer, compass, proximity, and ambient light.

Connectivity components like Wi-Fi, hotspot, Bluetooth 4.0, GPS, A-GPS, GLONASS, NFC, USB 2.0, audio jack, and other features. There is no HDMI or infrared support for this phone.

Blackview BV6100 has non-removable Li-Po 5580 mAh battery. This backs up the fact that this phone is a rugged one. The user can make use of it in the woods, mountains, and other places where charging opportunities are limited.

Lack of various colors to choose from

Conclusively, the price of Blackview BV6100 smartphone is approximately $189.99. For the availability, the smartphone is available for shipping as from second half of July 2019 and onward.

Where to Buy Blackview Phones Cheap