BLU Vivo X5 came on the scene as a smaller brother to the XL5. Like that smartphone, it too was released in September at the same tech event. It is smaller on the outside but not on the inside when you compare it with the sibling. Let’s see how many of the features are really a cutback. But… by the way, it comes at a price lesser than $100.

Design and Display of Vivo X5

The design of the phone is definitely bar shaped but it comes in plastic body. Dimensions are 153 x 73.4 x 9.1 mm and the weight is 160 grams which seems good enough. It comes in only one color – Black. That makes me sad. No waterproof – don’t even think of it.

The display of Vivo X5 is LCD capacitive touchscreen with 16 million display colors. The screen size is only 5.7 inches. Furthermore, there is 720 x 1440, the pixel density is 282 ppi, and screen to body ratio of 74.7 percent. As far I can see, the aspect ratio is 18:9. However, display protection is evidently lacking.

BLU Vivo X5 has two cameras like the one. The primary camera to the rear is 13 MP of which resolution in pixels for the video is 1080p@30fps. and has the ability to offer good pixels images. Also, the video quality is shown to be 1080p@30fps in HD. Other good features that can be found on the smartphone camera department are slow motion modes, LED flash, HDR, continuous shooting, auto focus, phase detection. As can be seen, there’s also 8 MP situated at the front for selfies. This camera, unlike the one at the rear doesn’t have flash capacity. 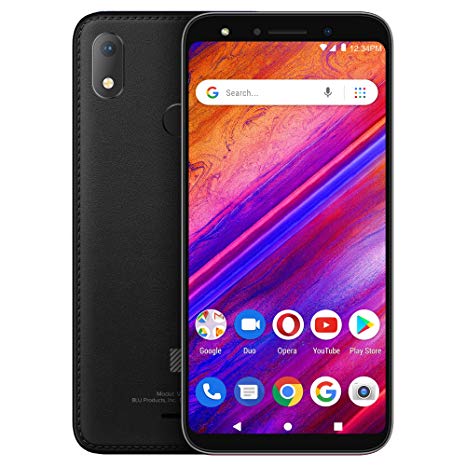 This Vivo X5 runs on Android 9.0 Pie operating system of which I can’t tell if it will upgrade to the latest Android. Going further, this smartphone is fortified with Unisoc chipset. There is also the CPU Octa core 1.6 GHz Cortex A55, while the GPU is IMG8322.

The Vivo X5, like the XL5 is known to be 3GB of RAM that cannot be expanded but the internal storage of 64GB can be expanded.  Probably, this can help in enjoying some heavy video games. As for the internal storage, it can be increased with a microSD card. Sensors found in the device include ambient light, accelerometer, proximity, and fingerprint.

BLU Vivo X5 is a 4G Android phone that has capacity for two nano SIM card slots. It is a smartphone running all the 4G LTE speeds available with utmost efficiency, and coupling that with 2G and 3G. However, connectivity components like Wi-Fi, hotspot, Bluetooth 4.1, GPS, A-GPS, USB 2.0, headphone jack, and other features are present in the device. There is no NFC herein.

Powering the Vivo X5 is the Li-Ion 2800 mAh removable battery which comes without wireless charging, whether fast charging is available or not is not really sure. The standby time is up to 500 hours on 3G. The 4G part has not been confirmed.

Vivo X5 smartphone selling price is official at $99. That is a reliable price when you look for it online. For the availability, the smartphone is also available for shipping as from the month of September 2019.

Where to Buy BLU Phones