There are a lot of $200 phones in the market and the competition is intense in this price range. Elephone are trying to make an impressively designed phone, and now they achieved a new level of premium design. Now you have a smartphone that’s well worth waiting for. The display aspect ratio is obviously high enough, almost frameless on the sides. The metal-rimmed Elephone P7000 Pioneer looks sharp and catchy. The speaker is located at the bottom of the phone, which has better sound experience than rear speaker. It has an iPhone like touch fingerprint ID on the back below the camera. No more scans, but one touch. The touch ID will recognize your fingerprint from any aspect as it’s a 360 degree identifier.

What seemed to be eternal wait for all, coupled with leaks, upgrades, rumors, teasers, disappointments mixed with expectations has finally and thankfully come to an end. As they say, so long the outcome turns out beautiful, who cares about the wait! And believe me, this outcome is a Gem in d form of the Elephone P7000 Pioneer .

Before going into further details, let me take a quick recap over the Specs; the phone has a 5.5-inch Gorilla® Glass 3 covered FHD display with 1920×1080 pixel resolution! churning out a decent 400ppi; It is powered by a 1.7GHz Octa-core 64-bit MediaTek MT6752 processor, running Android 5.0 Lollipop OS (with an option to run MIUI, Flyme, Freeme OS, EMUI) 3GB RAM, 16GB on-board storage, dual SIM, a micro SD slot (up to 64GB), 5MP front camera, 13 mega-pixel rear camera with a Sony IMX214 sensor, a lovely home button with an integrated breathing light (notification light) an impressive 3450mAh removable battery and a rear mounted fingerprint scanner “Press Touch ID” similar to that on the iPhone 6!

The phone has impressed me in every aspect so far, especially with its design and metal frame which not only gives it an expensive feel but grants protection too. I must say that it sits surprisingly well in d hand for a 5.5-inch.

The Elephone P7000 Pioneer is powered by the Mediatek MT6752 SoC and 3GB of RAM. This 64-bit Soc boasts eight ARM Cortex A53 cores clocked at 1.7GHz and a Mali T760 GPU, which makes that SoC quite a power-house, outperforming the Snapdragon 615. The MT6752 is starting to build a sort of a reputation for being one of the most power efficient MediaTek chips out there; that combined with the 3450mAh battery of the P7000, we’re looking at a battery life of more than an average day.

I haven’t really spent a lot of time with this phone yet, but from what I can see, the performance is Top notch! Image quality of the 13MP shooter is quite impressive and the lovely fingerprint touch ID works flawlessly. Battery life so far seems pretty good and the phone hasn’t shown signs of heating up.

Overall the phone looks and feels like a quality device… one that a company with global ambitions would make.

Enough talk then! let’s unbox this lovely beastly device of a thing and see how good it stands in front of the competition.

Well, we ordered this device indirectly through Jeffery who happens to be a really trustworthy reseller on Nairaland… Thanks man!

Where to Buy Elephone P7000 in Nigeria

The P7000 comes in a somewhat gray box (if I still know my colors well) which opens in a drawer-like way unlike the slide to open boxes we’re used to. On the top of the box is an inscription “open the box to get surprised.” Well I promise you, it’s a good surprise.

Inside the box you find a Tempered Glass, this usually costs more than N1,500, a screen protector film, a flip cover matching the color of the device, a USB cable, a wall charger and the P7000 which are well arranged in the wide gray box. I was a bit disappointed not finding an earpiece nor an OTG cable in this package. 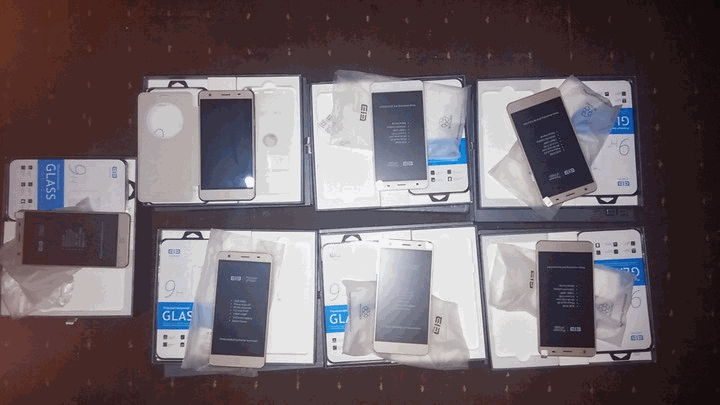 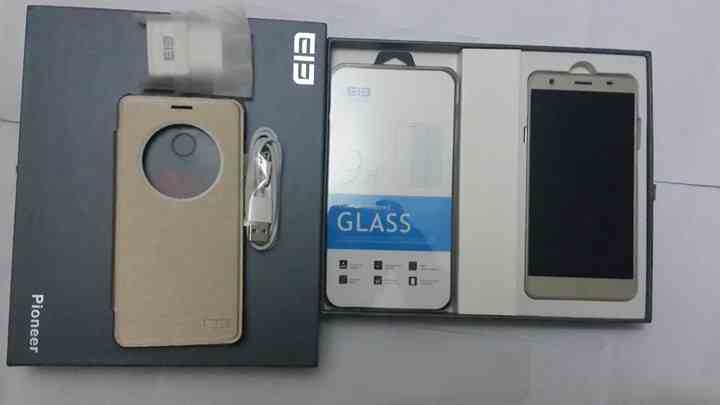 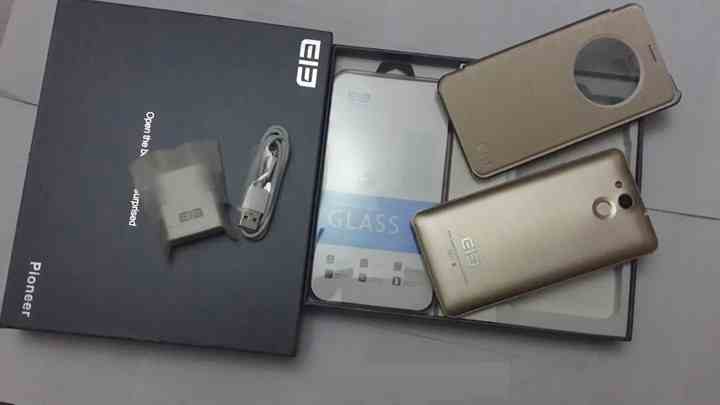 Elephone have been clever with the design of this Phablet I must say. It has this iPhone-like look which is really pretty.

If you look at current design trends for thinner bodies and narrower overall widths you could pick apart the P7000 for being a little bit chunkier than other devices, but why would you when it feels so comfortable and well made? 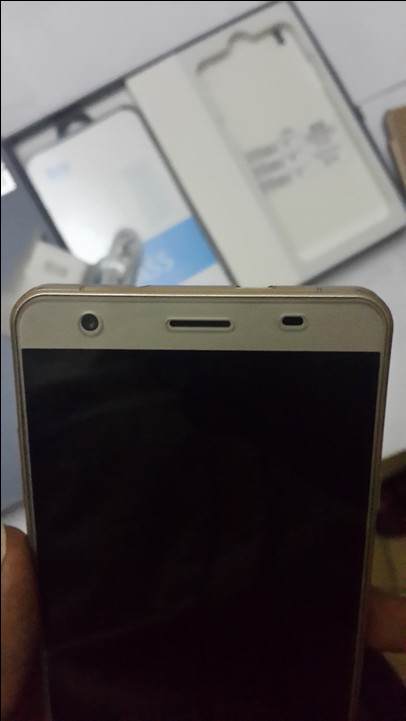 The P7000 features aesthetic design with a capacitive home button (breathing light) along the chin which serves as the dedicated notification light and yes it’s an RGB unit (so you can choose the color you prefer). There’s also a back and menu capacitive button along the chin, but these do not light up. It’s kind of nice that way.

Taking a tour around the exterior of the P7000 I found no odd joints or badly fitted components, and all the usual parts are where I expected to find them. A metal chassis (frame) sits round the edges of the phone, with precise cut-outs for a 3.5mm earphone jack and USB port at the top, power button by the right and volume rocker by the left side with machine-drilled holes at the bottom edge for the speaker. There are no SIM trays along the side as the rear cover is in fact removable. 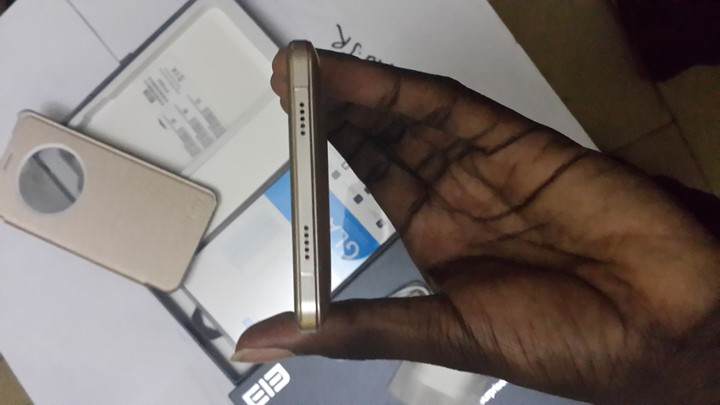 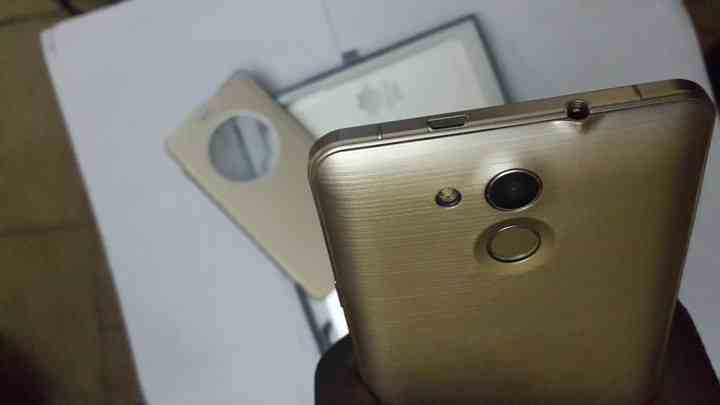 The rear cover is pretty flexible and looks to be made out of good quality plastic. It can be a little cumbersome to pry it out, but that’s a good thing I think, after all you don’t want it to come off or anything after every drop. Mine is already having a bit of a scratch around the designated hole for opening the rear cover, nothing alarming though. 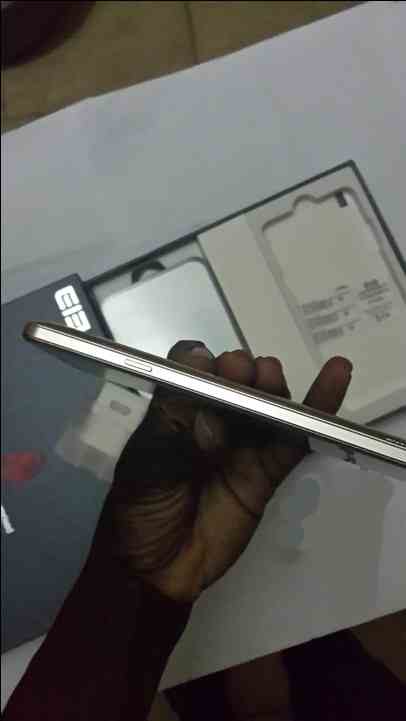 Inside, there’s space for a 3450mAh battery and 2 SIMs along with a MicroSD card. The rear is also where you will find the 13 mega-pixel SONY IMX214 camera and single LED flash by the side.

Just below the camera is the second most exciting feature of this phone for me – the rear Finger print scanner featuring “Touch ID” instead of the native swipe. It is as fast if not a teeny bit faster than that on the iPhone 6 (as seen on a YouTube comparison). It’s quite easy to get to the finger print scanner with your index finger whether you’re left or right handed and the phone sits comfortably well in your palm. Towards the bottom is the company’s logo “ELE” written stylishly on the rear along with the company’s motto? “Keep expecting and be surprised.” 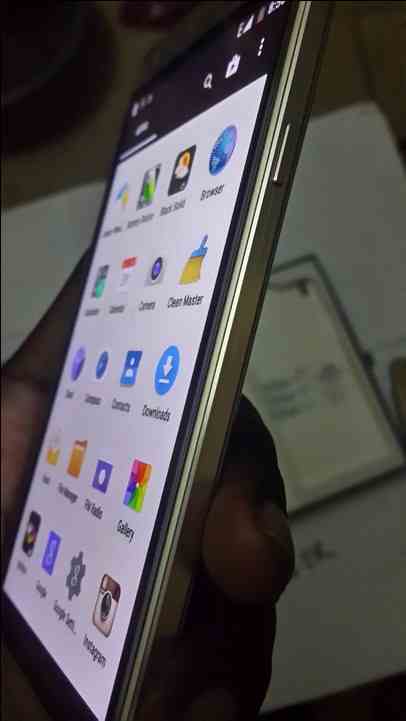 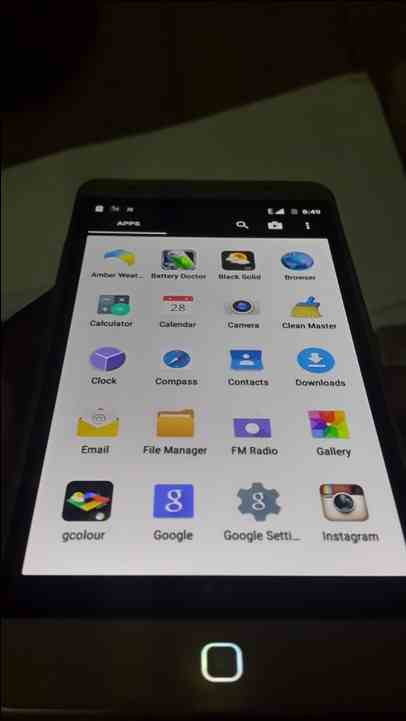 When you purchase the P7000 you get a phone that is powered by the all impressive MediaTek MT6752 64-bit Octa-Core Processor, 3GB of RAM and has a 5.5-inch FHD Corning® Gorilla® Glass 3 protected screen The P7000 has 16GB of on-board storage, a 13 mega-pixel main camera (Sony IMX214) and a 5 mega-pixel front camera. 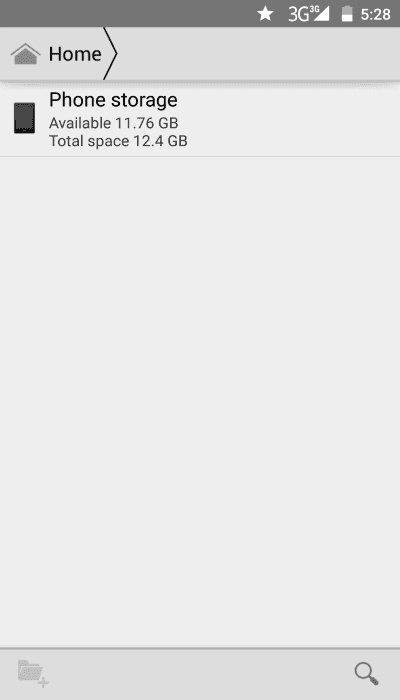 The 5.5-inch screen will blow you away with its color and sharpness, although some other reviews have stated that the screen is in fact not bright enough. I haven’t noticed this yet – time will tell I guess. Good news is that Elephone have already rolled out an OTA update to optimize the screen, ROM and polish the camera as well. The screen has really great viewing angles and colors don’t wash out on rotating the phone unlike in some other devices. I’m yet to test out the new update, but will let you on the changes I notice as soon as I do. 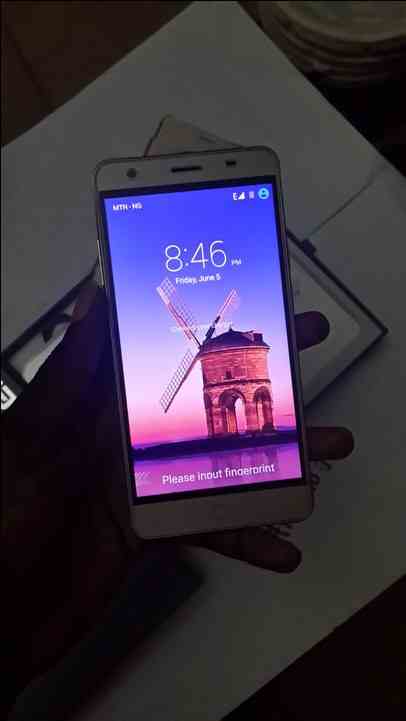 The P7000 has an incredible processing package that allows it to perform everyday tasks without complaint. Gaming and multitasking is totally lag free for now. When getting the phone out of the box be sure to check that your P7000 isn’t in battery saving mode (as some are shipping this way) this will prevent the screen running at full brightness. 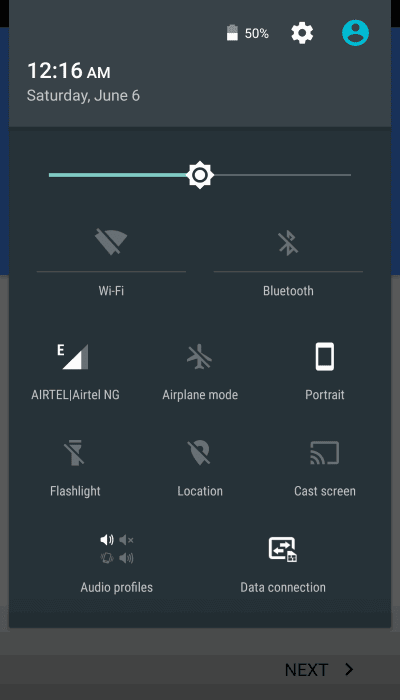 I haven’t downloaded or tested heavy games like Asphalt 8 yet, but most reviews on YouTube shows the P7000 handling them smoothly without any lag. One annoying bug I noticed earlier was that the “double tap to wake” function seizes to work at times, like right now as I’m charging the device. Other gestures (draw “e” for browser and the likes) are working well. I hope it’s not just bad luck from my end. 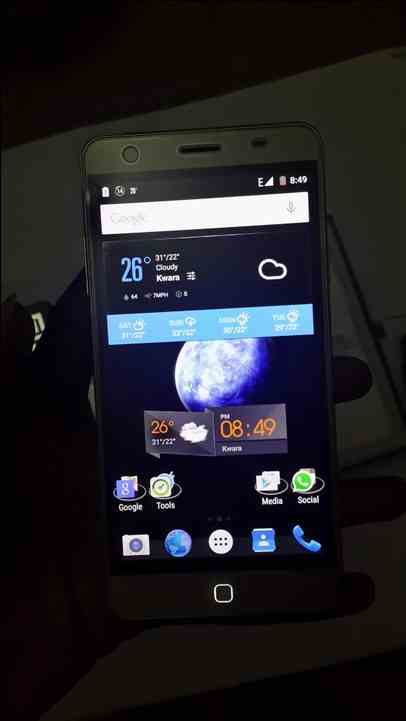 The phone doesn’t heat up much, thank God. And battery life so far seems accurately good, although I haven’t spent enough time on the phone yet. I’ll post screenshots of the battery stats when I’m satisfied and have used it enough.

For now though, I’ll post a screen shot of the battery stats so far. 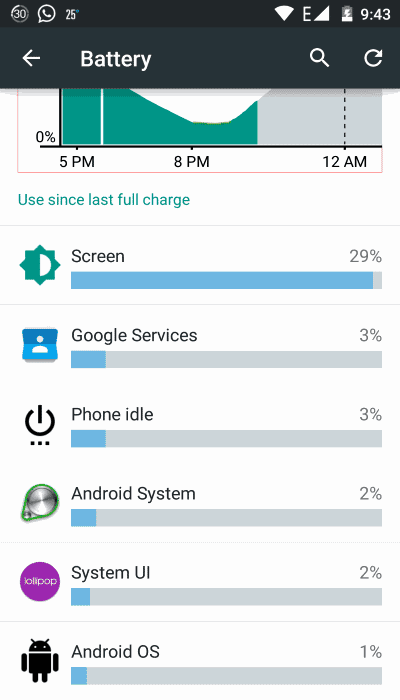 4G support verified. I don’t know if this will ever come in handy. Oh and less I forget, I haven’t been able to get a connection on the P7000. Maybe it’s just network (I pray so oo) but my tab has got a reception so I am using hotspot for the Elephone. 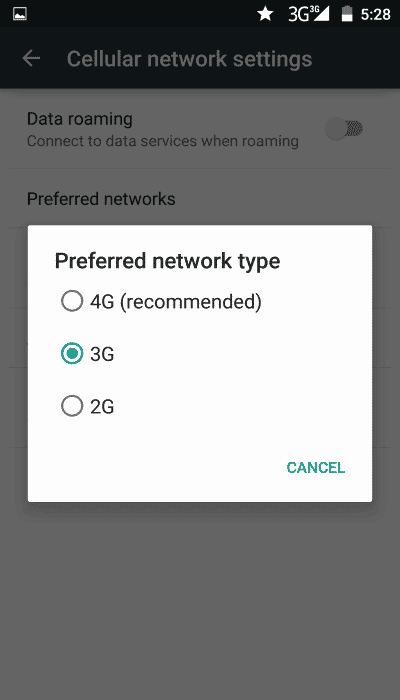 Sending a few files via Bluetooth made me realize how fast it pairs and detect nearby devices. Awesome! (CPU Z) 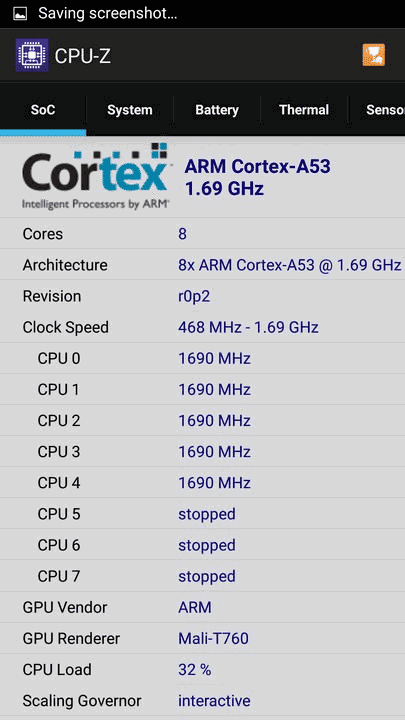 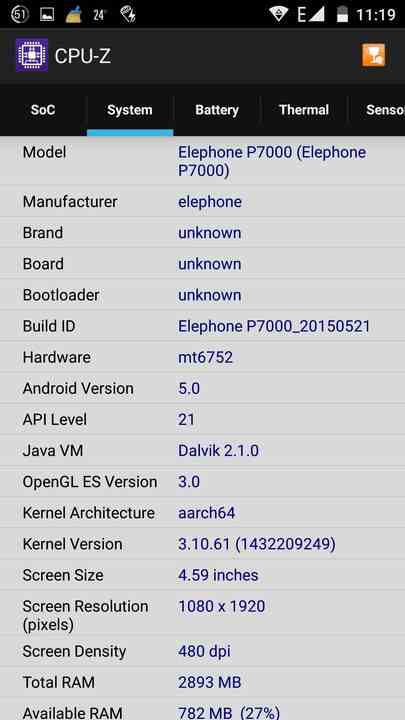 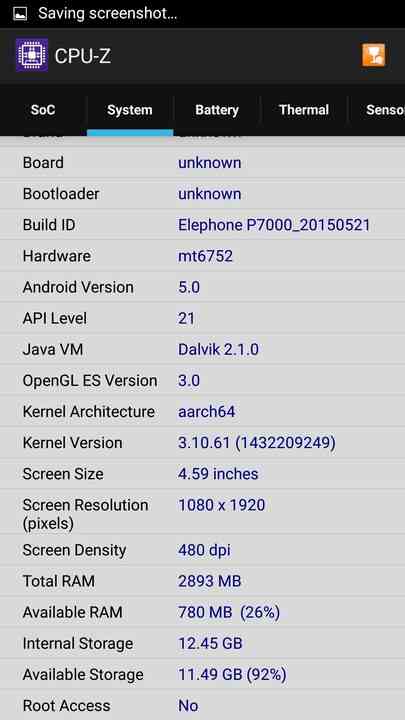 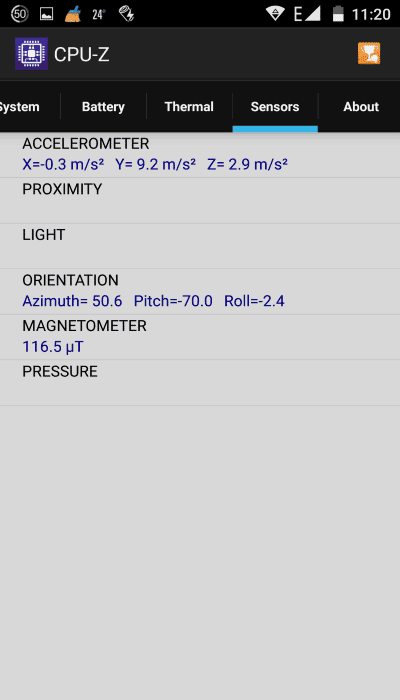 When I first wrote the specs of the Elephone P7000 (back in december), I was pretty excited, but skeptical too. I wanted the phone to be as good as the specifications suggested, but deep down inside I was worried that I would discover some deep dark secret lurking in the hardware.

So I have been impressed or has my heart been broken by this Chinese Phablet? To be honest I don’t think I needed to ask that. The Elephone P7000 is one of the best value Android smartphones I have used, full stop!

For the price of the phone, you are getting a good-looking and well-made handset with powerful hardware, 64bit processor, Touch ID sensor and an Android 5.0 Lollipop. How many other phones for less than #50,000 pack so much punch?

This will only be a quick hands on review. If you end up interested, stay tuned for more updates as I check out the phone more and probably discover a few bugs as no one phone is perfect. Meanwhile, feel free to comment below about anything that you would like to have tested on the phone, and I’ll try my best to include it in the updates.