Your iPad comes with a comfortable feature that enhances your web browsing experience. This feature is known as a pop-up blocker and its job is to block several types of pop-up windows from getting visible over web pages in Safari.

The pop-up blocker is enabled by default, and most times, that is precisely how you want it to be. However, there could be situations that will warrant allowing pop-ups. Some sites depend on pop-up windows to function properly, especially financial sites by banks.

Other websites make use of pop-ups to prompt you to register for services like newsletters. If you need to register, the pop-up might need to be seen.

Luckily for you, on your iPad, pop-ups can easily be allowed, it will only take a few clicks. It is actually impossible to select a list of websites that you wish to always allow pop-ups for, therefore you will have to deactivate the pop-up blocker for all web browsing. We advise you to allow pop-ups temporarily when it is needed and then re-enable it when you are through.

How Can I Allow Pop-ups On My iPad? 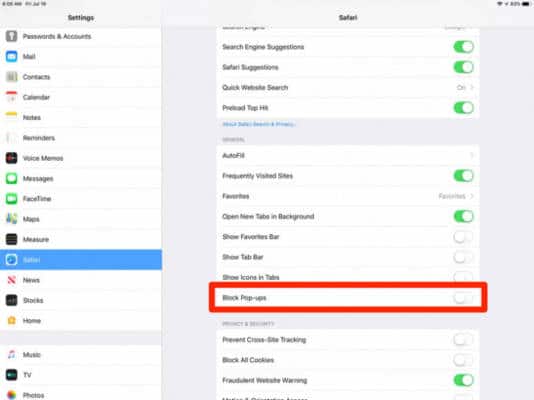 You Might Also Want To Read- How To Download Netflix Movies And Series On Your iPad To Watch With No Internet?

You just allowed pop-ups in Safari, and it will remain like that until you get back to Settings and activate it again. To activate it, simply scroll the switch back to the right.