If you have been expecting the unveiling of Apple’s video streaming service since its announcement 42 days ago, I bring you good news. Apple TV+ has been live starting November 1, along with ten original series and movies (which will surely be added to as the service’s lineup expands).

The service will go for $4.99 monthly, but if you have bought any new iPhone, iPad, Apple TV, or Mac system after September 10, 2019, you will get 12 months of the service free. Since Apple TV+ is now available, see How to Register For Apple TV+?:

How Can I Get Apple TV+? 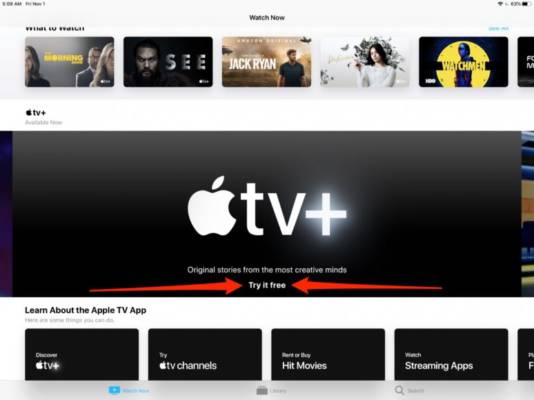 Apple TV+ works on these devices:

More Information About Your Apple TV+:

Apple TV Plus (stylized as Apple TV+) is an over-the-top ad-free subscription video on demand web television service of Apple Inc. that debuted on November 1, 2019. It was announced during their March 25 Apple Special Event held at Steve Jobs Theater, where celebrities involved with Apple TV+ projects appeared on-stage for the announcement, including Jennifer Aniston, Oprah Winfrey, Steven Spielberg and Jason Momoa.

Apple TV+ content is viewable through Apple’s website and through Apple’s TV app, which in 2023 expanded its availability to numerous consumer electronics devices, including those of Apple’s competitors—although not with a native app on the Android or Windows platforms, with further plans to expand availability to more devices over time. Apple TV+, along with the simultaneously announced Apple TV Channels a la carte premium video subscription aggregation service, is part of the company’s concerted effort to expand its service revenues by making recurring monthly charge distributed video content available widely to the public.

Apple had long been rumored to have an interest in beginning a streaming television service, and in 2015 entered into negotiations with various television studios and programmers to aggregate their content for a live-television streaming bundle. Negotiations fell apart over differing views on how to value the content, lack of transparency on details, and the personality of Apple’s chief negotiator, Eddy Cue.

On September 10, 2019, Apple announced at their yearly keynote that Apple TV+ would launch on November 1, 2019, at $4.99 USD a month (with a 1-week free trial) for an account that can be shared with up to six family members. Apple also announced that they would be giving away a year of Apple TV+ for free to anyone who bought a new iPhone, iPad, iPod touch, Mac, or Apple TV beginning that same day. Student subscribers to the monthly Apple Music service at a discounted rate also have Apple TV+ bundled in at no additional cost for the time being.