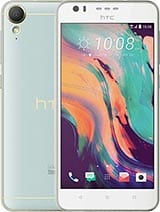 The HTC Desire 10 Pro wears a metal body that is specially crafted using laser cutting and having a metallic border on all colour variants which run all round the device. The device also comes with well-curved edges which would make for easy handling. The Desire 10 Pro sports a 5.5-inch Full HD IPS display with a Full HD resolution of 1920 x 1080 pixels and Corning Gorilla Glass protection.

The Desire 10 Pro is powered by a MediaTek Helio P10 chipset which is complemented by a fresh 4GB RAM in some versions and 64GB of built-in storage. There is another version which clinches 3GB of RAM and 32GB of internal storage space Both versions are expandable storage wise, up to a massive 2TB via microSD.

On the camera aspect, the HTC Desire 10 Pro looks like a pro, packing a generous 20-megapixel rear-facing camera with dual-LED flash, f/2.2 aperture, and laser auto-focus. Selfies are not left out as there is a 13-megapixel front-facing selfie camera which also has a 150-degree wide angle view capability for group selfies.

The device crams a modest 3000mAh battery, with support for fast charging which provides the lightening and also there is a rear-mounted fingerprint sensor which doubles as a tool to unlock the device and also to control the camera.

The Desire 10 Pro is available in Stone Black, Polar White, Royal Blue and Valentine Lux colour variants but the device is yet to ship, and the price has not been announced. We’ll keep you posted whenever that is done.