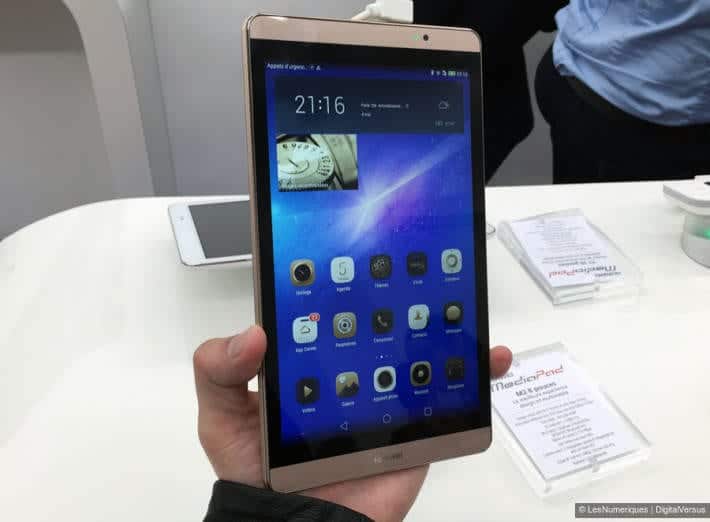 Huawei Mobile has announced the release of a new Tablet – Huawei Media Pad M2. Huawei quietly displayed the MediaPad M2 – which is the successor of the MediaPad M1 – at a pop-up boutique in Paris. The Huawei MediaPad M2 is an 8-inch Android-powered Tablet with a resolution of 1920×1200 pixels. This will definitely quench your taste if you have been wanting to get your hand laid on an 8-inch Tablet device over the past few months.

The MediaPad M2 measures a thickness of 7.8mm and weighing in at 310g, thereby making it lighter and thinner than the its predecessor – MediaPad M1. The Huawei MediaPad M2 has a stunning design, a metallic feel, and an all-aluminum frame, these are qualities that will make the MediaPad M2 stand out from the pack. Its clean lines, soft edges, and a finish will literally take your breath away.

The Huawei MediaPad M2 is packed with an 8-inch Full HD screen with a resolution of 1920×1200 pixels that would satisfy everyone’s pixel needs, which is considered an improvement on previous frequentative’s 1280×800-pixel resolution. Under the hood, the MediaPad M2 is powered by a 2GHz 64-bit octa-core Hi Silicon Kirin 930 processor, 2GB of RAM, 16GB of internal storage, gives support for microSD card which can be expanded up 64GB. The device is also packed with a large 4800mAh battery. Although the hours of usage on this device is not known yet.

The MediaPad M2 Tablet is expected to start selling in early June and also to come in three colors – Gold, Gray and Silver and two variants – Wi-Fi and LTE model with the Wi-Fi model starting at around €279 (approximately $313), while the LTE-compatible model will go for somewhere around €349 (approximately $392).

Before we jump straight to the full Huawei Media Pad M2 specifications, you might be interested in seeing the device key features.

Do you have anything to add to this article? Please do not hesitate to share it in our comment box below…↓