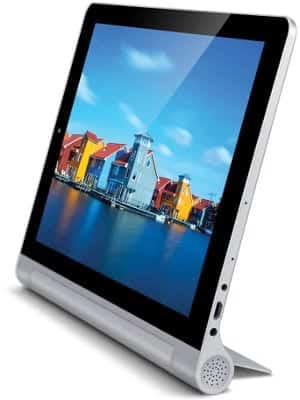 iBall Slide Brace X1 has a classic robust design that makes it attractive. The tablet has an in-built metal stand beneath its bottom bezel that gives it the ability to stand on a table. A speaker is placed at the junction where the metal stand meets the tablet’s touchscreen. The audio jack and the USB port are located at the bottom corner of the device when viewed from the right hand side. The front camera of the device is placed on the right side of the tablet’s touchscreen, meaning that the tablet will be placed in a portrait mode when photos are to be captured with the front camera. The tablet comes in grey colour.

The display size of iBall Slide Brace X1 3G is 10.1 inches (25.65cm). Well, that’s a pretty large screen that befits its tablet nature. The screen display type is the IPS capacitive touchscreen. Its screen resolution has an HD resolution of 1280 x 800 pixels for the crispness and clarity of texts, images and icons.

The camera unit of this tablet deserves a thumbs up. That popular notion that most tablets aren’t really good in the camera unit was put to null by iBall Slide Brace X1. At its rear, a 13MP enhanced AF rear camera is seen. A LED flash is also made available for brightening images in low light and off-light conditions. At the front camera unit, a 5.0MP shooter is responsible for the taking of selfies. It should be noted that the front camera has no LED flash.

For the storage of files and documents, an in-built 16GB storage is made available although 8GB of the storage covers pre-loaded apps and the OS. Using a micro SD card, the storage can be extended to 32GB. 2GB DDR3 RAM covers the multitasking and sleek running of apps on the tablet.

Long lasting duration of the tablet is assured with the in-built massive 7,800mAh non-removable Lithium Polymer battery. The battery has a standby of 24 hours once fully charged.