At the beginning of this month, Infinix Mobility released a list of its smartphones getting Android 7.0 Nougat update between April and July, and now the Nougat update for one of its most popular smartphones of 2016, the Infinix Note 3 has started rolling out.

The Infinix Note 3 and Note 3 Pro had earlier received a beta version of the update early in March which served to test the stability of the new OS version on Infinix smartphones. 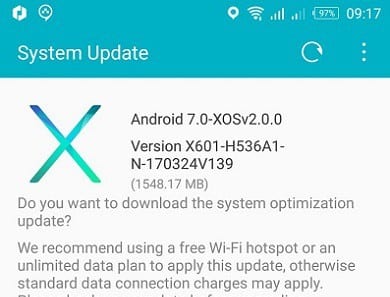 These are the same new features included in the beta update package released last month.

How to update Infinix Note 3 to Android 7.0 Nougat

You can update your Infinix Note 3 to the latest Android 7.0 Nougat over-the-air (OTA), that is by downloading the update package with your smartphone and applying the update in system settings.

The Infinix Note 3 Nougat update is about 1.5GB in size, so make sure you have enough data before you begin downloading it.

If you’re using other Infinix smartphones and want to when/if you’re receiving the Android 7.0 Nougat update, you can check here.