As the name suggests, the Intex Aqua 5.5 VR comes with a gyroscope which gives it VR support despite being a budget smartphone. The Intex Aqua series is getting a lot of new additions this days, as the Intex Aqua S2 was launched just days ago. 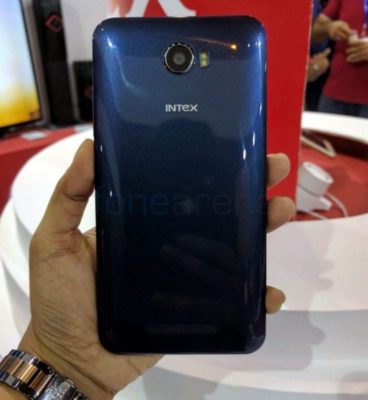 The phone is manufactured with plastic and the edges are rounded. The back of the smartphone is curved and is covered with shiny material which makes it beautiful.

The Intex Aqua 5.5 VR is powered by an entry-level MediaTek chip, the Quad-core MT6737V/W which has a processing speed of 1.3GHz and runs on the 64-bit process. It is paired with a Mali-T720 GPU which handles the graphic operations on the device.

The phone comes with 1GB of DDR3 RAM and 8GB of internal storage which can be expanded up to 32GB via the microSD slot.

The Aqua 5.5 VR comes with a dual SIM slot and is compatible with 4G LTE network bands with added support for Voice over LTE (VoLTE). It also includes the normal connectivity options – WiFi 802.11 b/g/n, Bluetooth 4.0 and GPS.

The The Intex Aqua 5.5 VR sports a 5MP camera at the rear which is accompanied by a dual LED flash to increase the quality of images captured in low light conditions.

There’s also a 5MP camera unit at the front for taking selfies, but this one comes with a single LED flash.

The The Intex Aqua 5.5 VR runs on Android 6.0 Marshmallow out of the box and is pre-loaded with 3D content. It comes with Intex LFTY which gives users access to content in multiple categories by swiping the screen to the left. As Intex put it,

The smartphone supports over 21 languages and comes with Value Added Services and benefits from Intex.

The Intex Aqua 5.5 VR will be available exclusively from Flipkart for Rs. 5,099 starting from the 19th of October. It comes in Blue and Champagne colour versions and would cost around N25,000 in Nigeria, KES 7,743 in Kenya and GHS 305 in Ghana when it becomes available in Africa.