Asides the ‘S‘ series now, phone makers Itel has launched the ‘MaxPower’ series. The first on the MaxPower series is the Itel P51 device. As always with this device makers, you would likely not be disappointed. The device passes as an entry-level smartphone with very modest specs. We would be taking a good look at the nitty-gritty of the device, and what we think about it. 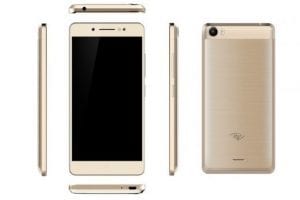 The Itel P51 MaxPower features a somewhat large 5.5-inch display, which would probably be palm friendly. It is sure an IPS display type. The display resolution is pegged at 720 x 1280 pixels. With a 267 ppi pixel density, on-screen images and icons are taken care of. Though, the pixel density isn’t what we expect from Itel. 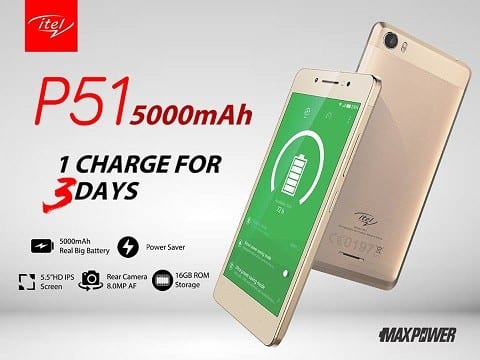 There’s a quad-core Processor that powers this itel device. The processor speed is pegged at 1.3GHz. It is also built on an Android operating system v7.0 (Nougat). At least, it runs on a more recent operating system rather than the itel S31 device OS.

For your storage needs (music, videos, files, documents and all), the itel P51 MaxPower avails users with a 16 GB memory. This space can be further increased to the tune of 32GB, and it would be with the help of a micro SD card. A 1 GB RAM is what takes care of the smooth running of apps. Well, I really think that at this time, this RAM size should not be put into use again. Itel could have done a lot better in this department.

On its rear, there’s an 8 MP Camera. This camera can record 1080p HD Video. Features of the camera include Autofocus, Dual-LED Flash and Face Detection. While a 2MP Camera is present on the front of the device. The front camera comes with a Soft Flash.

This would prove to be one of the major selling points of the device. The Itel P51 device comes with a whopping 5000 mAh Li-ion Battery. Hence, this device is ‘bae’ to heavy smartphone users. But then, I also think Itel should have done something on the RAM to help manage apps better. That would have significantly complimented the battery capacity.

According to Itel, you can enjoy up to three days of uninterrupted connectivity with this battery. How huge?

Itel P51 MaxPower is not yet available in Nigeria, Ghana, and Kenya. The device is set to launch in Nigeria on July 10, 2017. When it launches, you can buy the affordable Android phone at leading online stores in your country.

Where to buy Itel P51 MaxPower and Pay on Delivery