Not long ago, Bluboo released news about its new product plan in 2016, which including Bluboo Xfire 2, smartwatch Bluboo Xwatch and high-end 6 inch android phone Xtouch Plus.

According to the latest news, Xfire 2 is going to be sold soon. Another secret product from Bluboo – Picasso also brings its latest news.

Bluboo Picasso will be equipped with MT6580 quad-core processor, 2GB RAM and 16GB ROM storage. This is rare in MT6580 platform android phone so far.

Another thing, Bluboo Picasso has dual 8mp camera. Besides the front 8mp camera, there is a fill light to improve selfie performance. This 2GB Android phone is equipped with a 5 inch HD pixels On-cell display.

It is also leaked about the releasing date of Picasso – this phone will be released officially on February, 2016. And the retail price will be $99.99. 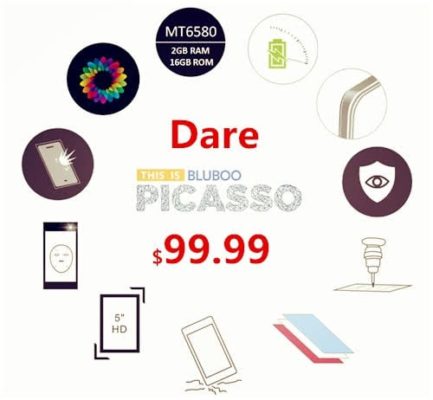 Bluboo officially posted a picture seems want to give their best reasons about the price tag of Picasso, see what you get from the picture.