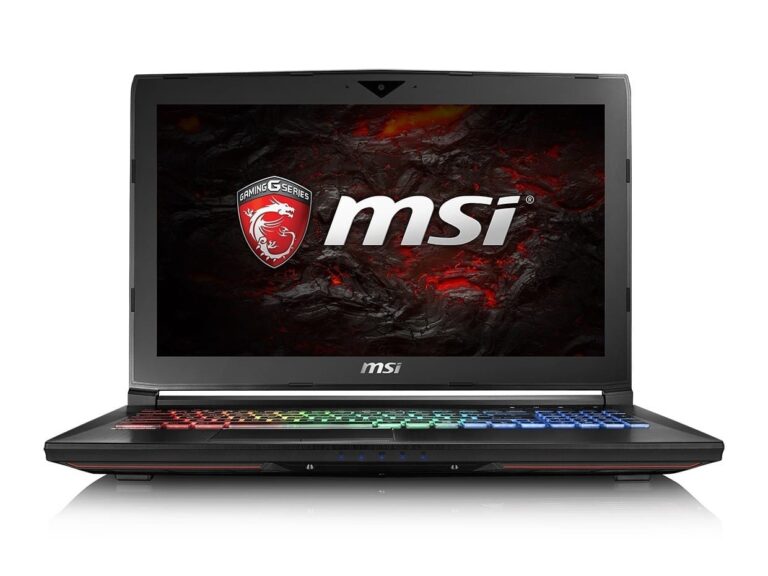 The Sword 15 is made entirely of plastic and weighs 2.25 kg with a profile of 24.9mm, making it thinner and lighter than many competitors. With that stated, the base has a tiny flex, but the effort made in the laptop’s interior design makes the MSI Sword stand out. It has a rectangular structural support pattern on the interior of the base and a metal element beneath the space to the left of the battery on the bottom panel.

It’s all about gaming on this laptop. This is why it has a Core i7-11800H processor and an RTX 3070 with 85W TGP. In my opinion, this is a very powerful package. Keep in mind, however, that the most competitive characteristic of this laptop is not on the inside.

Surprisingly, this device’s lid opens with one hand. It’s a little more pliable than the base. The bezels, on the other hand, are relatively thin, with the exception of the bottom one, which is generally larger than the rest. The upper one, for example, has an HD Webcam.

Is this MSI’s most powerful gaming laptop?

The display of the MSI Sword 15 is a 144Hz IPS panel. It has a 15.6-inch (39.62 cm) diagonal and a 1920 x 1080-pixel resolution. The aspect ratio is 16:9, with a pixel density of -142 pixels per inch (PPI) and a pitch of 0.18 mm. According to pcmag.com, When seen from a distance of 60 cm (24′′) or more, the screen becomes a Retina (one’s eye quits separating the individual pixels at this distance, which is usual when gazing at a laptop). The laptop can attain a brightness of 261 nits, with an average brightness sitting around 254 nits. Not the brightest screen on the market, but you are not playing video games in the sunlight.

This device’s most appealing hardware is most likely its Intel flagship processor. This gaming laptop is equipped with an Intel Core i7 processor from the 11th generation (specifically i7-11800H). This chip offers a 40% performance boost over the previous generation. This 8-core CPU has more power and can run at up to 4.6GHz dual-core frequency in order to maximize gaming efficiency. This boosts the notebook’s overall productivity and multitasking capabilities.

Furthermore, the MSI Sword 15 employs the top-of-the-line GeForce RTX 30 Series GPUs (specifically, the RTX 3060). This increases the device’s performance for both developers and gamers. The chip features some amazing technology that further impacts its performance. Tensor Cores and streaming multiprocessors are extra “packages” included in this chip. These cores assist the graphics card in achieving cutting-edge artificial intelligence.

The base model GF63 (8RC) comes with an Intel Core i5-8300H CPU, 8GB of RAM, a 256GB SSD, and an Nvidia GeForce GTX 1050 GPU. One feature that makes this laptop remarkable is its upgradeability. You can upgrade the graphics card to a more powerful GTX 1050 Ti for even better performance. The memory capacity, the RAM, can also be doubled to 16 GB (it comes with 8 GB of RAM pre-installed). It doesn’t end there, if you still want more power from the machine, you could get a better CPU. The costly core i7-Core i7-8750H can replace the core i5 and still run with the already installed GPU.

A laptop with several configuration options

The MSI GF63 Thin is an intriguing low-cost gaming laptop. It has a powerful CPU but a low-powered GPU, making it more affordable than most entry-level laptops. The Newegg exclusive MSI GF63 8RC is one of the cheapest gaming laptops with a GTX 1050 discrete graphics card. The GF63 is somewhat more expensive than Acer’s Aspire E 15, but it offers up to 67 percent more gaming performance and is exponentially faster than laptops with integrated graphics.

If you’re on a limited budget, the GF63 has all the features you want in a laptop without breaking the bank. MSI was able to cram a lot of punch into a machine that just weighs 4.10 pounds. Unfortunately, there are a few drawbacks to this little machine. A smaller battery is normally associated with a lighter laptop, and our tests revealed that the 3-cell battery was only good for roughly 4-5 hours of gaming.

Bear in mind that it won’t be able to match the performance of a budget gaming PC. However, the MSI GF63 8RC comes closer than any other laptop in its price category. On gaming, a test carried out by notebookcheck.net, Overwatch ran at a constant 90 frames per second on high settings at 1080p. However, more demanding games like Ghost Recon: Wildlands and Shadow of the Tomb Raider proved to be a little more difficult for the system to handle, scoring 29 and 35 frames per second, respectively.

GF76 Katana has a samurai feel to it as if it were a weapon of battle or a well-made suit of armor from medieval Japan. The all-black casing, red-lit keys, and raised curving edges make it stand out. Tsuyoshi Nag, a Japanese illustrator, is said to have created this design.

Thanks to its 12th-generation Intel Core i7 CPU, the MSI Katana GF76 delivers decent CPU performance for a budget 17-inch gaming laptop. Furthermore, its Japan-inspired chassis emanates a lot of styles. However, some gamers may be disappointed by the laptop’s 3050 Ti GPU performance. On the one hand, it allows you to play games with cinematic ray-tracing graphics for a low price, but it’s also extremely underpowered, especially when the performance sliders in MSI Centre are pushed all the way to the right.

The MSI GF76 is a good choice if you don’t mind mediocre performance in some recent games. On the other hand, if nothing less than super-fast framerates will suffice, you may wish to consider this option. On the MSI website, the GF76 Katana is available in seven different configurations. The CPUs are all 12th-generation Intel Core i7-12700H. However, the RTX 30 series GPUs and storage capacity vary.

This laptop delivers gaming at a reasonable price on a large screen.  As far as can be seen, MSI’s switch to less obtrusive, less “in your face” designs is going well. There’s a lot of room on a 17-inch laptop display, but you have to be careful how you fill it in. On the one hand, a laptop can become too heavy, while on the other hand, a laptop that is too light might become unstable.

The MSI GL series, as expected, has a plastic body with a smooth matte surface. Despite this, the build quality is satisfactory, despite the fact that the surface gets tainted with fingerprints. On the other hand, the lid is composed of aluminum, which gives it a tiny edge in terms of flex resistance. In terms of weight, while this is not the lightest 17-inch laptop on the market, it is relatively light at 2.5 kg. On the other hand, the laptop is somewhat thicker — 28 mm. Nonetheless, for a gaming laptop, it can be overlooked since it will have a positive impact on cooling.

Unlike some of its competitors, MSI does not merely offer a bunch of plastic but also a certain amount of quality, especially at this price point. The base unit’s lid and top are composed of brushed aluminum. Despite the use of metal, stability isn’t perfect, with both the cover and the base unit prone to warping and bending in various spots. This might cause the wood to squeak and fracture. The craftsmanship is excellent, and all the edges are nicely finished. MSI’s Bravo 15 features a relatively understated design. The red keyboard backlighting and the winged creature on the lid are the only hints at the device’s gaming origins. Aside from that, the casing is fairly plain and has a dark surface.

MSI has kept the design traditional. In terms of panel performance, the one we have has a high refresh rate display of 120Hz. The 15.6-inch Full HD display with narrow side bezels is shown when the lid is opened. With the top webcam and microphone positioning, MSI’s marketing does have a habit of not mentioning any of the color accuracies or anything about its display. Individual keys have a somewhat larger key surface, but not to the point where your muscle memory is thrown off. It could be easier for me to type, and I’m less likely to make mistakes.

The hexa-core Core i7-9750H CPU and GTX 1660 Ti GPU are mid-range gaming specs and a significant improvement over the Core i5-9300H and GTX 1650 found in most budget gaming laptops. For gamers, such as the MSI GE75, alternatives may include faster octa-core Core i9-9880H and GeForce RTX choices.

The MSI GE75 comes with many different CPU configurations. There are two core i7 with octa-core processors and the other with quad-core. For example, the Corei7-7700HQ, i5-8300H, i5-9300H, etc. For optimum performance, you could upgrade to the octa-core Core i9-9880H. The graphics processor, GeForce GTX 1660 Ti delivers outstanding performance and is just a little bit slower than its desktop equivalent.

In comparison to its competitors, the GF65 Thin seems a little archaic with its black brushed-metal lid and keyboard deck, plastic body, and red-backlit keyboard. However, you can enjoy that it’s less obvious that it’s a gaming laptop. The laptop’s body seems robust, and the plastic keeps it light at 4.1 pounds (1.8 kg). Even for a gaming laptop, the power supply is relatively small. All of the other ports are on the right side, while the power input and HDMI output (4K @ 30Hz) are in the middle of the left side, out of the way (if you’re right-handed).

When you pay $1,000 or less for a gaming laptop, you’re usually getting a discrete graphics chip that’s good for playing current demanding games at low-quality settings. While performance is good right now, it doesn’t leave you with much room for future graphics-intensive games. However, the GF65 Thin’s higher-end Nvidia GeForce RTX 2060 processor should keep your frame rates high for a long time. At the very least, it will last longer than a GTX 1650, 1650 Ti, or 1660 Ti, which are more common in laptops at this price point.

The standard model has a Core i5-1135G7 processor, while the more costly option adds a 1TB SSD to twice our system’s storage capacity. All three models have 16GB of RAM and a 14-inch non-touch display. The 14-inch, 1080p display has a 16:9 aspect ratio, just like the majority of laptop screens these days. It’s ideal for watching movies, but not so much for browsing through websites, spreadsheets, and other documents.

The screen can feel claustrophobic, with unnecessary space on the sides of a browser window or a Word document even though it comes with full HD (1,920-by-1,080-pixel) resolution and integrated graphics from the processor. The Prestige 14 is powered by an Intel Core i7-10710U processor from MSI. This processor has six cores and can run up to 12 threads at the same time. The clock rates range from 1.1 to 4.7 GHz, with the maximum frequency only being sustained for longer with adequate cooling. MSI provides customers with four pre-configured performance profiles that affect maximum speed, loudness, and battery life.

However, performance reduces when the device is strained. The performance can drop by 30% and be maintained until the completion of the test for single-core and multi-core performance in individual disciplines.