Not quite long ago, Samsung Mobile announced the Samsung Galaxy S8 and Galaxy S8+ duo. The specs and features of the two devices were amazing. Great design, beautiful display, nice camera as usual, water resistance and many more.

Though customers and won’t be getting hold of the device until April 21 when Samsung Mobile starts official shipping of the devices, the euphoria to use the devices for some reason is still on the increase despite the fact that some users haven’t​ even fully explored the Galaxy​ S7 and S7 edge.

The Samsung Galaxy Note 7 was a great device, one of the greatest Samsung ever made if you asked me. Well, till the “Note 7 Grenade” thingy of course. It was a fiasco.

Nevertheless, if the image provided by SlashLeaks is anything​to go by, then we might actually be looking at what seem to be the first picture or view of the Galaxy Note 7 successor. 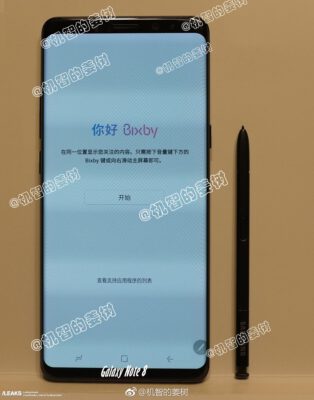 The image of the Samsung Galaxy Note 8 was shared without any detail concerning its specifications or features. No inkling was given whatsoever. Only an image to gaze and speculate upon.

Truth be told, anyone who has taken time to study the Samsung Galaxy S8 and Galaxy S8+ would notice the striking resemblance between the Note 8 and S8. The design, slightly curved screen and the on-screen keys. To me, this looks more like a Galaxy S8+ laying next to a Pen. The image is also not detailed enough to confirm if there is a slot for the Pen or not.

Before now, the Samsung Galaxy Note 8 have had some features leaked in a number of rumours. Some of them are a 6.4-inch Super AMOLED display, a Snapdragon 835 or Exynos 9000-series processor, 6GB of RAM, and up to 256GB of built-in storage.

We have had leaked (or is it rumoured) specs, now we have a leaked image of the Note 8. It’s only a matter of time before the puzzle is complete. Piece by piece, we shall get there?.