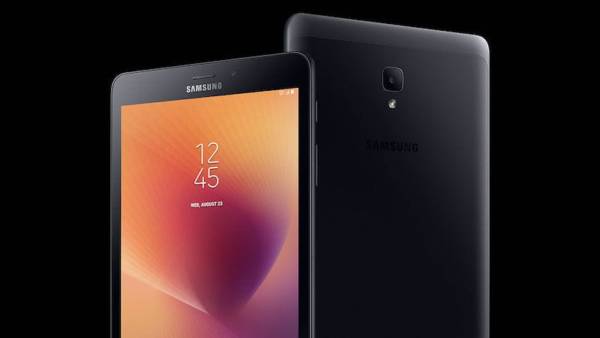 Samsung Galaxy Tab A 8.0 (2017) has a nice appearance. The tablet’s frontal is home to the touchscreen, front camera and the unique Samsung navigation buttons as well as the home button. The top bezel houses the earpiece and the proximity sensor. The volume keys and the power buttons are located on the right hand side of the tablet. At the rear, the primary camera and LED flash are spotted in a vertical arrangement. Its dimension is 212.1 x 124.1 x 8.9 mm (8.35 x 4.89 x 0.35 inches). Its 364g weight makes it have a rather light feel when held in hand. The tablet comes in two colour variants which are Black and Gold.

The tablet has 8.0 inches display screen size to itself. Just like the previous model, the tab’s screen size is the basis for which the tablet’s name (Samsung Galaxy Tab A 8.0 2017) was derived. The screen to body ratio is 70.1%. The screen resolution of the tablet of 800 x 1280 pixels takes care of crispness and clarity of texts and icons. Its pixel density is 189 ppi. It has 16M colours.

Seeming like rhymes, Samsung Galaxy Tab A 8.0 has a rear camera that aligns with its name. Its rear camera has 8 megapixels with f/1.9 aperture. The camera has features such as geo tagging, HDR, touch focus, face detection and autofocus. The rear camera possesses a LED flash for brightening images in low light conditions. Its front camera utilises a 5-megapixel shooter to capture selfies. The front-facing camera lacks a LED flash.

The tablet uses out of the box Android 7.1 Nougat as its operating system. The processor of the tablet is a quad core Cortex A-53. This quad core processor clocks at 1.4GHz. The chipset that powers the device is the Qualcomm MSM8917 Snapdragon 425. Handling the graphics production is the Adreno 308 GPU.

A non-removable Li-Ion 5,000mAh battery is what acts as the powerhouse of the device. The battery gives the tablet up to 36 hours talk time on 3G.

What is Samsung Galaxy Tab A 8.0 (2017) Price and Availability Status?

You can click on the links below to view latest Samsung Galaxy Tab A 8.0 (2017) price & availability.