To some, it is still more of a dream, or an unexpected occurrence, how Snapchat just sprung out from the blues to become unarguably one of the most widely used and popular social media App overnight. With highlights like image and video sharing, chat, sharing and viewing of stories and lots more released by the company; Snap Inc., over the years, one would begin to wonder if they have new stuff in store for users. Well, they sure do have more. Just read on.

It is no news that new users or fresh entrants in the Snap world more often than not, have difficulties navigating and exploring the features of the App to the fullest. I for one remember I had to take special time out to tutor some friends on the App usage (I hope they won’t see this. I promised to keep it a secret. HEHE). There are also reviews on some websites and forums where users (or former users) claimed to have deleted the App because of the sophisticated interface and difficulty in usage. Apparently, Snapchat is also very well aware of the problems in navigation and usage by new users and have decided to shine some light to the dark tunnel they find themselves by releasing the “Universal Search” feature.

The Universal search feature is a search bar located at the top of the Snapchat application. The Universal search aims at easing usage of the app whereby users can easily navigate the numerous features of the app such as Discover, groups, Our Stories, publishers and even allows users search for their friends. 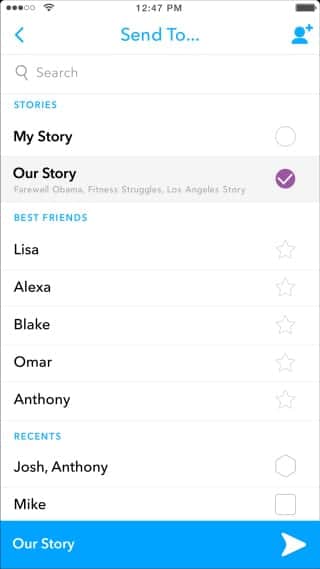 The company, Snap Inc., further expresses that the interface is designed for speed; aimed at enabling locating whatever it is you’re looking for within the shortest period of time and for you to keep on snapping. It is certain that the App function will be enhanced by the new Universal search capability of the App. Also of particular interest is that users can now swiftly join a friend’s thread or story in no time – all thanks to its “Quick Chat” suggestions.

Snapchat have also been criticised and ridiculed in the past for making finding new accounts to follow a herculean task because it lacks users suggestions or recommendation list. The Universal search feature also solve this problem as the search box makes it easier to search or seek for new accounts.

The Universal feature has launched already but will be selectively available to some users on the Android OS platform and will be rolling out soon to all iOS and Android users.