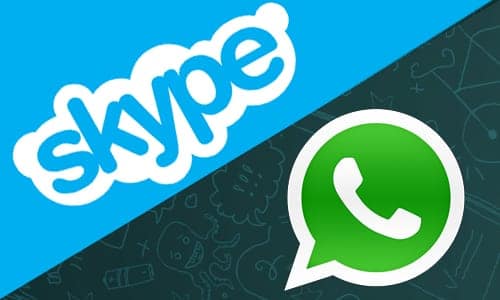 Telecommunication companies in Nigeria may block calls made on instant messaging applications like WhatsApp, Facebook and Skype, with a motive to increase revenue generation.

If the news reported by The Punch is anything to go by, then the proposed action of the Telcos should be a thing of worry to any average Nigerian. The telcos are seeking to prohibit Nigerians from carrying out voice and video calls on Skype, WhatsApp, Facebook and any other Over-The-Top (OTT) services.

The rationale behind the proposed blockage by these companies is however linked to the losses being encountered on a daily on international calls. They also have their eyes on the potential N20trillion revenue that could be gained from this action.

“It is an aggressive approach to stop further revenue loss to OTT players on international calls , having already lost about N 100 tn between 2012 and 2017 , ” says a manager at one telco company.

PUNCH also report that the Telcos blames the Nigerian Communications Commission for not adequately regulating the sector in order to protect and keep them in business.

Then, NCC in a counter reaction through its Director , Public Affairs, Mr . Tony Ojobo , said , “We don’ t have any evidence of that . We do not regulate the Internet.”

One of Nigeria leading telecommunications company, MTN Nigeria said that the Over The Top (OTT) content services had a “ cannibalising effect ” on network operators ’ voice and data revenue , because they provide “ free” services , which duplicate those already provided by network operators such as voice calls and the SMS.

Public Relations and Protocol Manager , MTN Nigeria, Mr. Funso Aina According to him , highlighted that the problem is that “these services are provided using network infrastructure of the operators , but without commensurate compensation to operators“, PUNCH reports.

“At the same time, they are denying operators of revenue to grow their networks , thereby impacting on service delivery and long – term sustainability“, Aina added.

“ For instance , to date , MTN has invested over $ 15 bn in building its network in Nigeria . You can now imagine an OTT leveraging the network to deliver its content without investing a kobo locally . The impact on revenue is huge .

“Furthermore, because these entities are not licensed , and because they have not built any infrastructure locally , they do not have the same costs as the licensed operators .

“They do not pay taxes , they do not employ any people locally , and indeed , they have no local presence whatsoever , meaning they do not make any contribution to our economy and their services are denying those who make contributions of income.”, Aina conclude.

He also stated that opinion and views of his company regarding OTT services is what is held by most other stakeholders within the industry.

This is really silly and laughable thought by these Telcos. Who else agrees with me?