Lite Social Media apps can be the advantage for your Android. An advantage for the Battery, and the CPU. Most of the times the Normal Social Media apps that people use in their Android ruins battery and Performance of their device. And sometimes due to heavy load on Android CPU due to apps, Android automatically restart to end those Background running services of apps. And this gives a refresh to Android to Run appropriately. You may probably notice this thing in your Android. This mostly happens with Low-end smartphones. So, if you want to have a healthier phone for forever then replace the high-end Social apps that you use with these top 5 lite social media Apps right now.

If you still not confirmed about using Lite Social apps instead of Normal Social Apps then let me help you by explaining them.

Because Knowing their pros and cons can clear your doubts at first place and help you to decide which one will be better for your phone.

So, let’s get straight to it.

What is Lite Social Media Apps?

In some lite apps, you may not get some good features, but they will deliver you speed and hangs freeloading. And this is because when lite apps project made by developers, they care for only one thing; how to make it load faster even in low-end phones.

And to make lite social media apps run faster, they either remove some features or Cutdown every unnecessary features in available from the main version. And when final apps come to the end of the development, finally they compress the files to make it small in size for fast downloading and installing.

Also, Lite social media apps are specifically made for two things – For Low-end Phones and to save battery, improve performance in Android phones.

Here are the top 5 hand-picked Social Media Apps for your Android device to reduce the load on CPU and RAM: 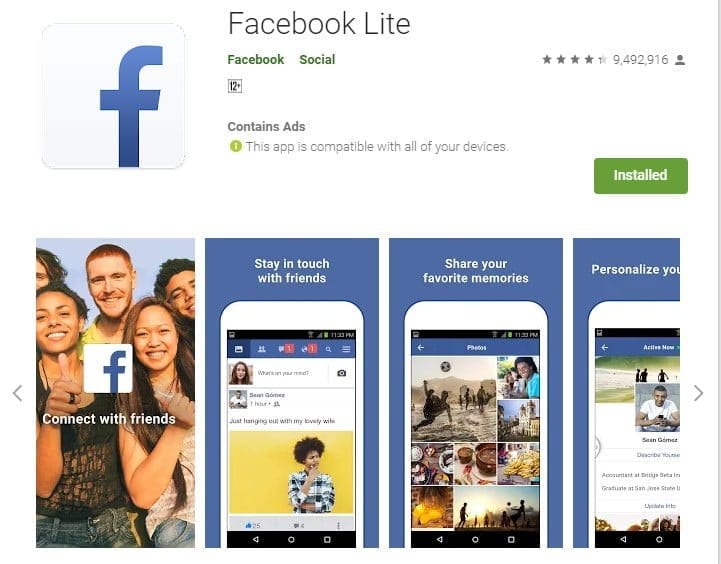 When the word “lite” is searched in Google Search engine, Facebook-lite comes first in the result. Because its the first lite social media app that was made and become popular. Facebook lite is much more stable than Facebook App because of its size and files compression. And low-end smartphone can efficiently run it without any lags and hangs. You can even Run Facebook with 2G network, and the bonus is it doesn’t slow down.

With a 2G network, you can watch videos on Facebook, view high-quality image (High size images takes time to load on Facebook lite with 2G connection), view story of others, chat anyone with speed and much more.

The Facebook lite interface and design are super simple. And it uses a combination of Blue and white color (Both are in low RGB). The color is probably friendly for Humans eyes, and I’m sure it will not damage your eyes even if use it too much. Now let me show you some awesome features of Facebook lite.

There are many good features the Facebook lite app has that is too common with the Facebook app. The above features are the only that I found useful to say.

In the end, Facebook-lite is the best lite Social media app, and I highly recommend to replace the Facebook app with Facebook Lite to reduce the load from your Android. Follow the below link of Facebook lite to install it in your Android from Google Play Store instantly. 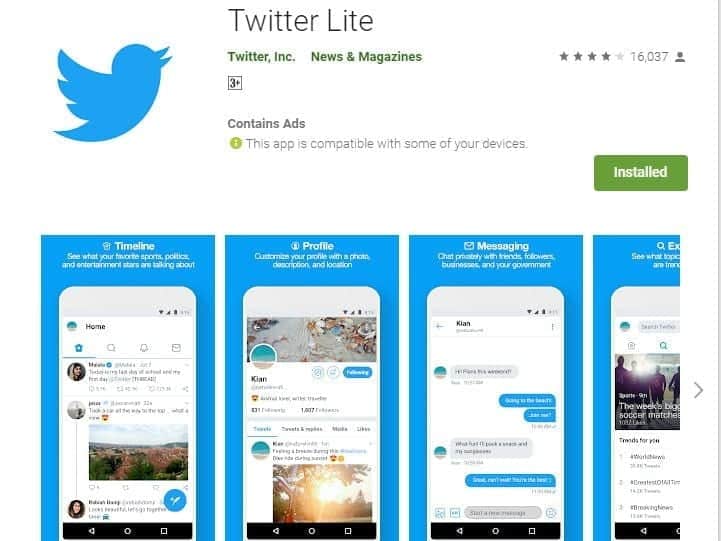 Another Best lite Social media apps that built for giving less load to Android CPU and RAM. Twitter Lite has too many things to Provide to their users. Trust me; After installing and testing this lite app, I just can’t believe how a Lite app can deliver too many features with low file size. Twitter lite is real Lite Social media app because it has everything customized perfectly for Low-end phone users. Yes, everything!

From its color combination to Design, everything is fine! Also, the color combination it uses is White and Light blue which is an Eye-friendly color like Facebook lite. With twitter lite, you can explore the Tweets from your following, and top twitters. You can also customize your profile picture, description, timelines, etc.

Another Good thing that Twitter lite has is messaging. You can chat with your follower, following even in low connection which is a great deal. Now, I think I pretty much explained about twitter lite to help you know about its Interface, design and user experience. Let me show you its unique features that will help you to know deeply about Twitter lite.

These are some unique and useful feature that I found useful to explain. Overall, Twitter lite is really a Good lite social Media App that you should adopt right now. Just Follow the below link after this Paragraph to download the Twitter lite App from Play Store.

The fastest job searching and networking platform are now easy to access. LinkedIn lite is super fast than its original version in loading term. It makes job search experience delightful! As you know, LinkedIn is a Social media network where people make a connection with companies, Entrepreneurs, marketers and more. The problem was in its website and Android app, the loadings were so slow which make their users frustrated and to exit. But the good news is LinkedIn cares about their users, and that’s why they built a Lite Version app of their LinkedIn App.

There no such major changes were made in LinkedIn as of Now on its latest Lite version app. But not all the features are implemented like Manage company page! This is a huge disadvantage in LinkedIn Lite. Because we mostly care about our own things. And if we can’t access our business pages then how it will be useful for us. This one is the biggest disadvantage I have found on Lite social media app LinkedIn. And it feels like they are working on implementing it. Hopefully, we see that feature soon.

So, let’s talk about some good side and features of LinkedIn lite. The Interface of LinkedIn is quite similar to Twitter lite and Facebook lite apps. And one thing that I noticed that all the lite social media apps that I explained above, uses low RGB color in their theme. I think it helps them to make their app lower in size.

LinkedIn has some good amount of features in his Lite App:

These are some Good features that I found useful on LinkedIn lite. Overall, LinkedIn lite is a Good lite social Media app. I have given a Download link below, just click to Download and Install it in your Android.

Line Lite is similar to WhatsApp, and with that, you can do free Messaging, Video Calling, Group chatting, and a lot more things. Using line Lite can give you the ability to get in touch with your friends and family fast. Because the services it provided are super fast and stable. If you compare Line lite with Line app, you will found pretty much difference. Like the loading is fast, takes less data, uses less memory, eat less RAM and more. On the other hand, the Line app is just the opposite.

The theme color and Elements are well managed, and that’s why it delivers a Good user experience. Let me show you some awesome features of it.

Line lite has good little features to list here, and that’s why I listed the most two. You can try this lite social app from below link.

A lightweight Platform for short and funny videos. Vigo Lite is a Good app for entertaining yourself for minutes to get a refresh. If you have stress time going, then you should take advantage of this Vigo lite app. In Vigo lite, you will find videos related to Comedy, funny, Lip-syncing, fashion, and beauty. The content is increasing every day, so you never get bored watching the same video.

Vigo lite is customized for Playing HD quality videos in low-end Phones. You can also create your own videos there and share it on Instagram and such a great platform. For creating an engaging video, there are many filters, and the transition has added to make your video looks great. If you want to show your talent, then I highly recommend working on the Vigo lite app. It also has some great features that you need to know if you are about to use it.

Overall, Vigo lite is an amazing lite social media app, and you should definitely give it a try.

Replacing those high-level apps with these lite social apps will give you a lot of benefits like Battery savings, Performance improvements, Data saving, storage saving and more.