UMIDIGI, a Chinese smartphone maker has unveiled an amazing (at least on the outside) smartphone which would go without bezel on three of its sides. The name given to this masterpiece is the UMIDIGI Crystal. The Crystal is expected in two variants, an all-metal edition and a blue Lumia edition. The smartphone would reportedly cost $99 when sales begin on the 15th of June, this year.

The UMIDIGI Crystal bears a striking resemblance to the phenomenal Xiaomi Mi MIX released last year, and that’s so because the Crystal is a direct rival of the Mi MIX. It has similar specifications to it and looks the same on the outside, and if the phone performs as good as the Mi MIX, it is sure to give the Apple of China a run for their money.

The Crystal sports a 5.5-inch display with a resolution of 1080 * 1920 pixels (Full HD) and 401ppi of pixel density. The screen is covered by a capacitive 2.5D curved glass with Dragontail glass serving up adequate protection against damages. It features an aluminium alloy unibody design and, don’t forget, it’s bezel-less on three sides.

As it comes in two editions, both editions display differences in this aspect. The all-metal edition is powered by an Octa-core MediaTek MT6757T Helio P25 SoC with a 2GB/4GB RAM variation along with 16GB/64GB of internal storage.

The blue Lumia on the other hand runs on the Snapdragon 835 Soc with a 6GB RAM along with128GB of internal memory. Both variants are powered by the same Mali-T720 MP2 GPU. The smartphones offers a storage expansion up to 128GB via an hybrid slot.

The crystal will sport a 13MP autofocus camera on the rear which also comes along with Dual LED flash. The selfie camera on its opposite end boasts of a 5MP shooter with no such thing as a flash.

The smartphone runs Android 7.0 Nougat OS out of the box. In a time when some smartphone makers still overlook the Nougat OS to adopt the Marshmallow, I must say Bravo!! to UMIDIGI. The Crystal features a fingerprint-sensor which we do expect is embedded in its home button. 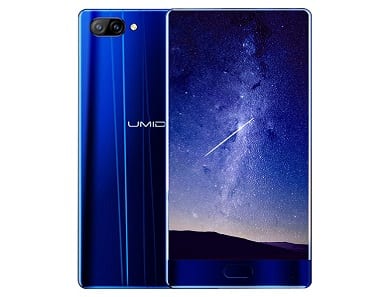 Availability and Price of UMIDIGI Crystal in China & India

The Umidigi Crystal is a $99 smartphone and it is expected to go on sale starting on the 15th of June. It comes in Blue colour and is currently available for pre-order.