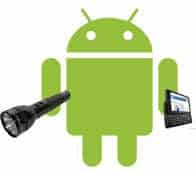 There always comes a time when you need to use your smartphone as a torch light. Your smartphone cannot be a replacement for a LED Maglight or a real torch. But anyway, it can still help in situations where you need a source of light such as a torch.

Well now, almost all Android phones come with their default flashlight app, so you do not need to download any torch app anymore. Below, we will talk about the different ways which you can use to turn on your Android phone flashlight.

How To Turn ON Flashlight Using the Torch Widget

A widget is a small shortcut, usually bigger than app icons which can be added to the Android Home Screen to access apps going straight to particular sections of the app. Widgets can also be used to run certain actions on an app without even opening the apps. With the torch widget on your Home Screen, you can turn your Android smartphone’s flashlight ON and OFF with just a tap on the widget. With the guide below, you will learn how to add the torch widget to your Android smartphone Home screen.

The same method also works for other launchers except that some require slightly different methods.

How to Turn on Android smartphone Flashlight Using The Notification Bar

You can also turn on the flashlight by going to the torch app on the app menu.