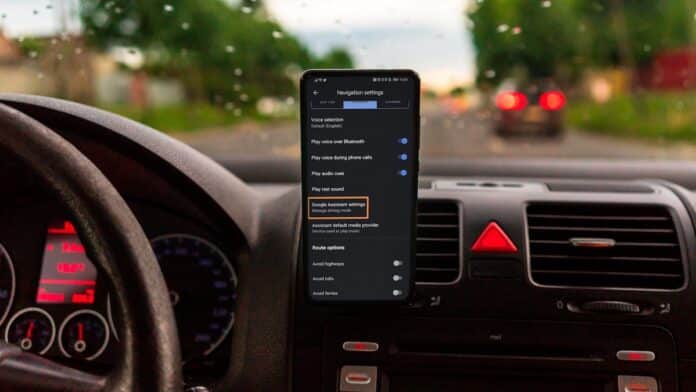 For many users, Google Maps is the reference GPS navigator on both Android smartphones and iPhones, but using it while driving is very dangerous for yourself and for other road users. In most cases, we will always have to pull over to change an option or to launch an itinerary modification.

We can use Google Assistant, which is built into the Maps app and always ready to use, so we don’t have to pull over and change the settings every time.

In this guide, we will show you how to use voice commands on Google Maps to get new routes, get routes to points of interest, or do anything else on your phone without ever taking your hands off the wheel.

To activate Google Assistant on Android smartphones, you will first have to update the Google app, open the app of the same name on the phone, press the More menu at the bottom right, then Settings, press Voice, and finally the Voice Match menu.

Also, make sure that both Hey Google and While driving are turned on so that you can use voice commands with Google Maps. If you want to launch voice commands only with your voice, press the Set voice model or Reset voice model buttons on the same screen, and you will follow the procedure to train the Google Assistant to recognize only your voice.

To activate Google Assistant on the iPhone, first of all, download the Google app on the iPhone, open the aforementioned app, press the More menu at the bottom right, select the Settings menu, press Voice, and activate all the switches on the screen.

From now on, you will be able to use the Google Assistant on the iPhone instead of the Siri assistant, as already seen in the guide How to replace Siri on the iPhone with a new voice assistant.

Install and use Google Maps

Once you’ve fixed your Google Assistant, it’s time to open up the Google Maps app and start navigating. If you have never opened this app before, it is advisable to check if it is correctly updated on your device using the download links available for Android and iPhone.

Once the app is open, use the search bar at the top to search for the destination, then press Directions and then Start to open the GPS navigator integrated within the app.

Are you new to technology and have never used Google Maps as a navigator? In that case, you can read our article, “Complete Guide to Google Maps” right away.

After setting the destination and setting off in the car, you will never touch the phone again while driving. This behavior is extremely dangerous, given that a second of distraction is enough to cause accidents, even fatal ones.

From now on, you can use the voice commands of the Google Assistant within Google Maps to control most of the functions of the navigator, as well as obtain functionality from other apps on the phone.

The voice commands that you can use directly inside the navigator are:

If, on the other hand, you have opened Maps but have not set any destinations, you can also do it on the go using only voice commands, such as those visible below:

To learn more about the use of other apps and services while using Google Maps, you can read our guide Controlling Music in Google Maps on the navigator.

With the voice commands seen above, you will be able to use Google Maps without ever taking your hands off the wheel in complete safety, given that the vast majority of navigator functions can be activated (or deactivated) even with the help of your voice.

If you have a modern car with Android Auto support, the integration with Maps is even more effective.

If your car does not have Android Auto support, you can integrate voice assistants by following our guide on How to Use Alexa or Google Assistant in the car.