Vizio smart TV lets you stream all your favorite shows, music, movie, and many other kinds of entertainment. Vizio TVs are assembled in China and Mexico, and the main TV suppliers are AmTRAN.

All of these Vizio TVs are considered smart but they don’t come to the user alone like that. All come with the SmartCast OS platform. The company that is known as Vizio also sells soundbars, SmartCast, and other products.

With Vizio TV you can stream online entertainment from Netflix, prime video, Apple TV, Disney+, HBO Max, Fox Now, YouTube, YouTube TV, NBC, Vudu, and many more. The smart TV allows you to watch hundreds of free channels, you only need to stream from your personal device to your Vizio TV.

Why Look for the Power Button of Vizio TV?

Basically, this is not the first thing you think about when you buy this smart TV. Why? It is due to the fact that you don’t need the power button to turn on the TV. It’s almost like when you bought a LED TV. It was awkward for you to leave your seat, go over to the TV, and find the power button so could turn. That’s not the first thing that comes to mind of anyone who buys a new TV. You switch on the TV with the remote. It is the same thing with Vizio.

It is possible that you’ve been using the TV for many months without ever thinking of a power button but one day, you try to turn on the television and it fails to come on, using the remote.

Maybe you couldn’t even find the remote one day while trying to turn on the television. You could look everywhere in the house and not be able to find the remote. In the event that you do find it, it could have been damaged, not able to work with brand new batteries. But you needed to watch the TV.

For others, the situation was that the TV suddenly went blank while it is being watched. At this stage, the TV may not respond to the remote at all.

Where is the Power Button?

That’s the one-million-dollar question in this guide. You may ask: how can I find the power button? Merely looking at your Vizio TV doesn’t mean you’ll see the power button. Most TVs have their power button in a secluded place. Often, the location is not so obvious to anyone.

Apart from the power button, there are also other buttons you can find on the television. These include volume, channel, and input buttons. The company is said to be hiding these buttons for two reasons. The first is that it cares about aesthetics, and won’t want anything to clash with the sleek, minimalist design of modern-day TVs. The second reason these buttons are not meant to be used for navigating menus. The company has a remote and a smartphone app that is designed to handle all those more efficiently than those physical buttons. It is even more convenient because you don’t have to get up, walk back and forth, and sit down just to control the TV.

How to turn on Vizio TV without Remote 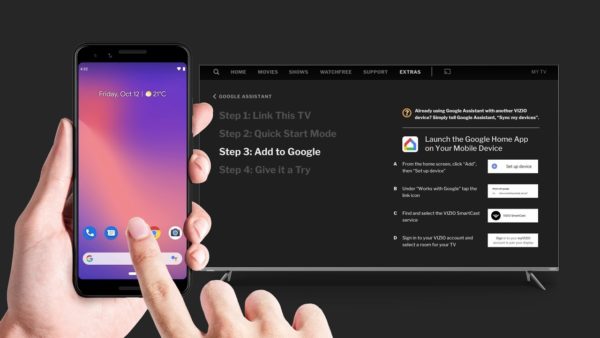 How to turn on your Vizio TV: Use SmartCast App

This is regarded as the simplest way to turn on your Vizio television when you’ve lost the remote, or when it is no longer working. You will make use of the Vizio SmartCast app for iOS or Android.

How to turn on your Vizio TV with a PS4

Avid gamers will love this. Of course, they could just get the television to turn on by starting up a game from the PS4 console. Here below are the steps needed.

How to turn on your Vizio TV with Nintendo Switch

Take note that connecting and turning on the TV with PS4 is a bit different when it comes to Nintendo Switch. Here’s what to do.

These are the three ways to turn on your Vizio TV without using the remote. The best of them all is the smartphone use as a remote. It is very simple and most effective. Enjoy streaming your hundreds of TV shows on your Vizio smart TV!