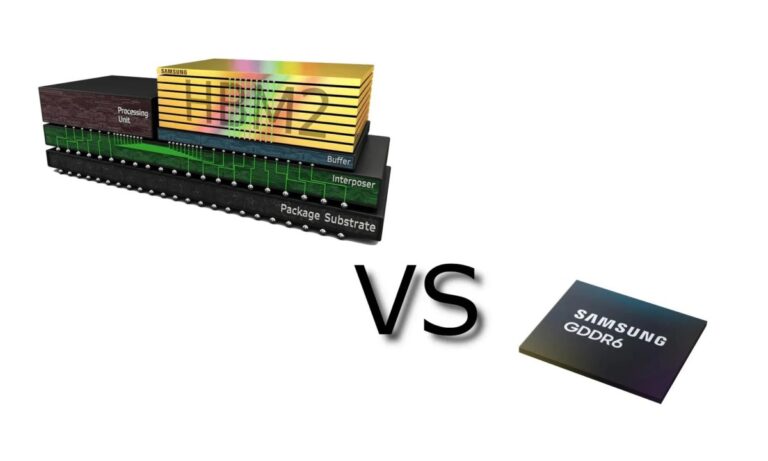 A few years ago, we had very good people saying that AMD would be able to return to the highest range of the graphics card market, all thanks to the use of HBM2 memory instead of the ‘old lady’ GDDR. However, due to the price of the development and production of this type of memory, AMD Radeon went back, betting on GDDR6 memory just like NVIDIA.

Table of contents: show
1 Having said all that, what is the difference between HBM2 and GDDR6 memory?
2 However, on the HBM2 (High Bandwidth Memory) side, things are a little different!
3 So what is the big advantage of HBM memory?
4 Related Reads:

Having said all that, what is the difference between HBM2 and GDDR6 memory?

Therefore, GDDR6 (Graphics Dynamic Random Access Memory) is the last iteration of the most used memory in the world of graphics cards. It is typically based on 32-bit memory chips, such as GDDR5 while being divided into two 16-bit logical segments. Thus, as in GDDR5 memory and other memory tops, several chips are mounted side by side on a 256-bit or higher bus, in order to power the graphics chip.

However, on the HBM2 (High Bandwidth Memory) side, things are a little different!

In case you don’t know, the HBM2 memory is only capable of 1 Gb / s per pin… The curious thing is that it has a lot of data transfer pins! About 1024 pins per chip! This is obviously too much for a PC, so it is necessary to use a circuit designed to control the thing, an ‘Interposer’ (as you can see in the image above).

So what is the big advantage of HBM memory?

As energy consumption increases considerably with increasing frequency, the system used by HBM memory allows high transfer rates using significantly less energy compared to GDDR memory, as it is not necessary to reach super-high frequencies to reach the same level of performance.

Something spectacular now that graphics cards are increasingly essential in supercomputers and data centers. Not to mention the release of some energy that can be used by the GPU.

Basically, HBM memory uses the same strategy as several modules to achieve high levels of performance, which has been so successful in the world of AMD processors. That is, theoretically, instead of two stacks, it is possible to have 4, 8, 12, 16, as many as needed. However, the production and implementation of this technology is still extremely expensive and complex, so for now, AMD has returned to GDDR memory.

What is the difference between GDDR6 and HBM2 memory? – Besides, what do you think about all this? Share your opinion with us in the comments below.