Until recently, watching anime streamed (and legally) was not possible. Compared to the past, in order to better combat piracy, streaming services are becoming more widespread.

We are not yet at the level of America, whose streaming market is much wider, but now you can watch several anime and drama series for free or at a low price in a completely legal way also.

Here are the recommended streaming sites:

Crunchyroll (free / paid depending on options)

The best-known site for streaming anime, it transmits many subtitled anime both in English and other languages. It also transmits anime simultaneously with Japan. For fans, it offers many titles at a good price. 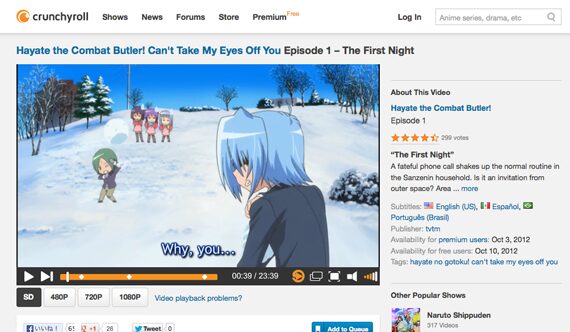 Streaming site with an almost unpronounceable name, it has an excellent catalog of Anime, both in Japanese with subtitles and dubbed. Many are Anime already broadcast in English a few years ago, but there is no shortage of news never broadcast on TV and simulcast from Japan. All completely free, at the price of some advertising!

The alternative to Crunchyroll and Vvvid, with fewer series available. It has several Japanese anime subtitled and dubbed, the platform is completely free, just as Vvvvid offers advertisements to support itself.

Viki (free / payment depending on the options)

A site to see different dramas and shows, both oriental and in other languages, and some anime. It does not have such an exaggerated selection compared to other services, but I appreciated the possibility of following the shows with subtitles in different languages, often also in the original language. Not a small thing for those who study languages! Unfortunately, some content is not available for those who live outside of America …

In particular, you will find many Korean series, but there is no shortage of interesting dramas in Japanese.

The official Yamato Video channel offers several series of its catalog subbate (simulcast) or dubbed (for the oldest series already broadcast in some countries). Something interesting is found, although it is less rich than other similar services. In fact, there is little to complain about since it is completely free!

Netflix (payment, free for the first month of trial)

Landed for more than a year, its catalog is expanding more and more of anime and drama. Most often they are in the original language with subtitles in many languages ​​(including Japanese!), Other times they are dubbed.

Compared to other services, it has fewer series, but has two strengths- streaming is fast to load and of excellent quality, it presents a new series not present on other platforms.

Learn Japanese from anime (or drama)- can you?

In addition to being very fun to watch, anime is an excellent material for improving the language. If you want to deepen the topic I recommend you read this article, in which you will find tips for learning Japanese from anime, anime or even from movies.

My main advice is, if possible, to somehow hide the subtitles, so as not to get distracted by the translation and pay more attention to Japanese speech!

Do you know other sites that broadcast Japanese series in a legal way, visible from English? Then leave a comment! And if you like, share this article with your friends who are passionate about anime and drama!