This new device has been released in the month of September 2018 for the USA marketplace. However, it appears that people from Europe are already ordering it.

This new device comes in 4 inches IPS LCD capacitive touchscreen display of 16 million colors. It comes with the body dimensions of 124.3 x 65.2 x 10.4 mm. It weighs 104 grams.  The body material is plastic.

The screen to body ratio is 56.2 percent. The screen resolution is 480 x 800 TFT technology LED pixels with 5:3 ratio and 233 ppi density. BLU Advance L4 is also multi-touch.  The colors of the device are as follows – black, cyan, white, and teal.

There’s a 5 MP rear and another 2 MP front shooter. So there’s not too much to admire here, just something for the user to go by. The features for both cameras include LED flash, even as flash could be missing from selfie cameras in other Android smartphones. 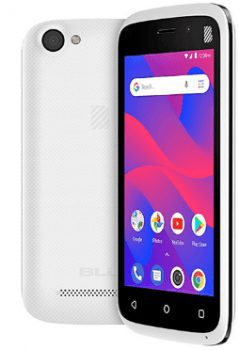 BLU Advance L4 is powered by Quad-core 1.3 GHz Cortes A7 based on new Spreadtrum SC7731E chipset. The device provides a great experience with Mali 400 graphics processor unit. The BLU Advance L4 is operating on Android system 8.1 Oreo. It is believed that the smartphone’s firmware will update to the latest Android anytime the user wants.

For storage purposes, there’s 512 RAM for the internal memory that cannot be expanded. The internal storage capacity that can be expanded up to 64GB by the use of a microSD card is 8GB.

The networks found on Advance L4 are 2G and 3G only; no 4G at all. Sure enough, if the user is online, top speed isn’t guaranteed. On the other hand, this guarantees power consumption management in the device.

However, the device has GPRS and EDGE for connectivity support. These work seamlessly on its dual SIM components.

So, in a nutshell, the BLU Advance L4 is able to run with dual Nano and hybrid SIM, working with Wi-Fi, HSDPA, GSM, GPS, and Bluetooth. The other options available are Proximity and Accelerometer sensors.

The price for BLU Advance L4 is set around $50. Not surprisingly, many of the excellent features have been eliminated. But it’s all good for those who don’t have much money to spend, yet want to use a smartphone of some sort.

It is now available for orders and not just for people in the United States only, but for other parts of the world.