Perhaps you need a 12.9-inch touch tablet that you could do some laptop tasks on, opt-in for this Apple iPad Pro 12.9. 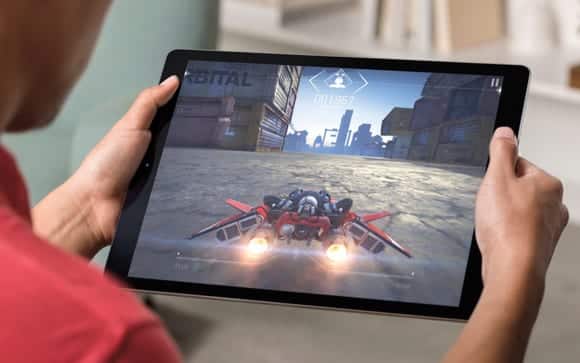 The 12.9 inch Pro is large and may not be good to hold with one hand when reading or to view movies. It is not designed for reading, though it does that perfectly with its Retina display that’s quite bigger than most MacBooks. The design looks than it 2015 model.

It has a Touch ID button, lock and power button, volume keys on the chassis. The Apple Logo on its back is reflective aluminium. The Camera has some bumps but prevents the whole unit from rocking on a table which is satisfactory for note-taking and drawing with the pencil or just typing on its screen.

Its keyboard is powered directly from the iPad through its three pins Smart connector. The keyboard does not have its battery, neither does it require Bluetooth or any other connection means.

Apple designed it to be a laptop alternative because of the new slipcase that they are selling, which is intended for tablet and its pencil.  The pencil is still expensive, and it charges through the iPad lightning port.

Scrolling in it is extremely sophisticated. Video rendering in high-intensity applications is perfect especially for designers as it makes their workpieces real and artistic which cannot be achieved in smaller displays. Its ambient light sensor manages brightness quite well though it is hard to read outdoors or in direct sunlight. The touch screen is directly on top the screen, instead of working on the glass between you and panel. The size of this iPad makes easy for the screen to break when it falls, so take good care of it while handling it.

Miscellaneous Features – other Interesting features include;

It has four speakers unlike iPad mini 4 and does not have a very high sound quality that can fill a room but is still okay for your enjoyment. It also has dual microphones that are meant for calls, audio and video recording.

Battery life on this apple Ipad pro 12.9 is sufficiently okay. It Chasis is stuffed with a decent sized 41 watts hour battery that can sustain you for a long hours day work which lasts longer than your handset. Note that it takes a long time to complete a full charge and using it while charging is not okay because it might stand still on the same battery percentage.

The improvement in its camera is great. Apple did this for professionals for studio photography, and other tangible things, so it is not a useless improvement. It has a 12MP sensor that works well with optical image stabilisation, video recording e.t.c. The front camera is a 7Mp HD and is useful for FaceTime like other iPads.

Its iOS 10 behaves like a full pc operating system. Multi-window on ios 10 is simply a two side by side applications in full screen. The great news is that the standard iOS 11 is now available so that you can opt in for a better experience.