BDF K960 is an Android 3G tablet that was announced on 26 September 2017 and was released on 4th October 2017. It comes as a surprise that the tablet released this year still runs on an Android 5.1 Lollipop OS. However, the tablet is one of the most affordable on the market. Apart from this out-of-date OS, the tablet has a large display size. As it is presented as a budget device, its other specs aren’t too bad either. Let’s briefly look into the tech specs of the tablet. 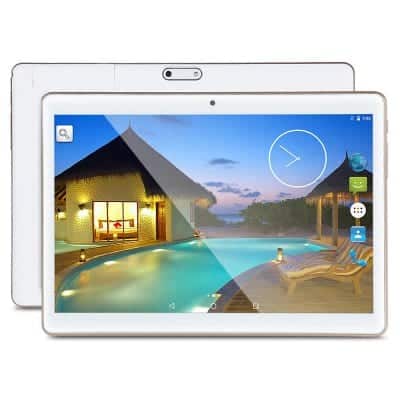 BDF K960 has the traditional landscape view of a tablet. The top bezel of the tablet houses the front camera while the bottom bezel remains empty. The dedicated keys on the tablet are the power button and the volume buttons. Even more, the tablet is way heavy with its 447g weight. The tablet comes in only Black and White. Its plastic build and its dimensions of 225cm length, 16.1cm width and 1.0cm thickness make up the tablet’s design.

I said earlier that the tablet PC has a large screen display. This screen display is 9.6 inches, and it presents a vast viewing experience when movies are watched and games are played. The screen resolution of the tablet’s display is an average 1280 x 800 pixels. As this handles the sharpness of texts and icons, it has a pixel density of 165 ppi. The IPS LCD capacitive touchscreen has the multi-touch input (up to 10 fingers) and has 16 million display colours. The display area of the Android 3G tablet is not so large as it is locked at 69%.

Powering the device is a Quad Core ARM Cortex-A7. This processor clocks at a speed of 1.3GHz. The chipset used by the device is the MediaTek MT6580 chipset. The 32-bit CPU of the tablet makes use of the 28nm process technology. I’ll probably not make a big deal of the tablet’s GPU (ARM Mali-400 MP2) which clocks at 400MHz.

Responsible for the multitasking activities is the 1GB RAM. It’s a poor one and also discouraging. Its 16GB internal memory stores up files and documents. Its internal memory can be extended with the aid of a micro SD card. The expansion limit is 32GB.

The tablet makes use of a non-removable 4,000mAh battery. The Lithium-Ion Polymer battery gives the tablet about 7 hours talk time on 3G. There’s cellular connectivity on the tablet; 2G and 3G network types serve this function. Bluetooth v4.0, WLAN and USB connectivity are on the device.