When Leagoo T5 got launched by the Chinese OEM, the world noticed a slim and powerful designed smartphone. Hardly did we know the smartphone was going to be re-launched in another format. We’ve seen collaborations between OEMs and football clubs, so this (Leagoo T5 THFC) doesn’t come as a shock. For the uninitiated, Tottenham Hotspur FC is a football club that competes in the first tier of English football – The English Premier League as well as other competitions such as the UEFA Champions League and the FA Cup. Just so you know, Leagoo is the official mobile phone partner of Tottenham Hotspur FC. Stay with me as we look into the specifications of Leagoo T5 (THFC).

The rear design area is where the major difference between the Leagoo T5 and the THFC version appears. The rear houses the Tottenham FC crest as well as the Leagoo logo. Asides from this design, every other thing in the Leagoo T5 design remains the same. The smartphone comes in a deep blue colour denoting the Tottenham Hotspurs FC colour. 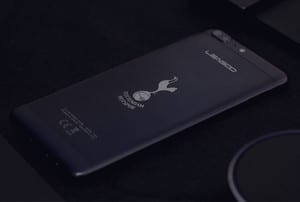 Leagoo T5 THFC’s hardware is the exact same as the Leagoo T5. MediaTek MT6750T SoC, Octa core 1.5GHz ARM Cortex-A53 CPU and ARM Mali-T860 MP2 GPU sums up that category. It runs on the Android v7.0 Nougat OS. The role of multi-tasking is well overseen by a 3GB RAM while a 32GB is in charge of storing files. The internal storage can be extended to 128GB with the use of a micro SD card.

The rear camera segment has a dual camera setup with the same quality as the Leagoo T5, that is, 13MP primary snapper plus 5MP sub snapper. A LED flash is present. The front camera has a 13MP shooter that takes beautiful selfies.

The battery life also didn’t get an improvement. It remains stuck at 3,000mAh with a Fast Charge Technology added to quicken charge time.

What is The Current Leagoo T5 (THFC) Price and Availability Status?

You can click on the links below to view latest Leagoo T5 (THFC) price & availability.

Where to Buy Leagoo T5 (THFC) & Pay On Delivery