The Motorola Moto M has been in the news for a while now, thanks to a TENAA certification and a couple of specs and photo leaks. The launch date of the smartphone (in China) is even known, revealed to be November 8 by a Weibo user. Now, press images of the Moto M have been released and as usual, they give us more information about the smartphone.

UPDATE: The Motorola Moto M has been officially announced on the 8th of November in China, and will be available for sale from the 11th of November 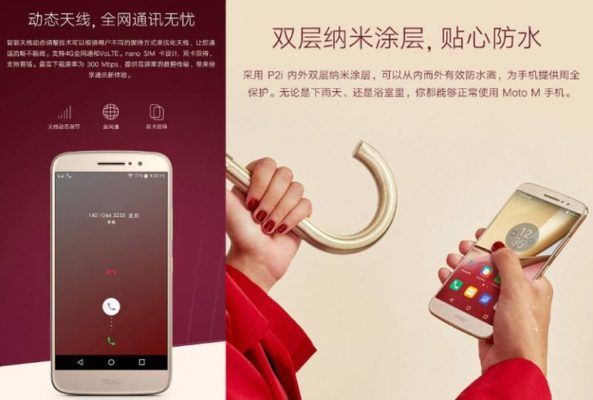 The Motorola Moto M sports a 5.5-inch display with a Full HD (1920 * 1080) pixel resolution. The smartphone sports a metal unibody design with a curved back and possesses water repellent nano coating which is a feature common to Moto smartphones.

The Moto M is powered by a 2.2GHz octa-core Helio P15 processor and a Mali T860 GPU. It comes with 4GB of RAM and 32GB / 64GB internal memory variants, both of which can be expanded with an external SD card.

It has a 16MP camera with dual-tone LED flash and PDAF at the rear, while an 8MP camera with 85-degree wide-angle lens handles photography at the front. The smartphone packs a 3050mAh battery which comes with Turbo fast-charging feature.

The Motorola Moto M comes with a Dual Nano SIM slot and supports 4G with VoLTE. It uses the Dolby Atmos 360-degree audio technology and features a fingerprint scanner beneath the rear camera module. In terms of software, the Moto M runs on Android 6.0.1 Marshmallow out of the box.