From the manufacturers of beauties like the UHANS Note 4, Uhans i8, Uhans S1, and Uhans Max 2 is yet another “tough and rugged” beauty – the UHANS K5000. While this isn’t the first smartphone from Uhans that has its focus on ruggedness, the K5000 is expected to do better than any other rugged smartphone from the brand; like the Uhans U300.

Table of contents: show
1 DESIGN AND DISPLAY
2 PROCESSOR, OS AND STORAGE
3 CAMERA AND BATTERY
4 PRICING AND AVAILABILITY
5 Where to Buy the Uhans K5000
5.1 Uhans K5000 Specifications 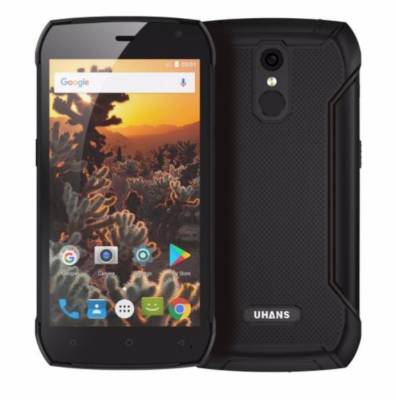 Just like every rugged smartphone there is, the Uhans K5000 isn’t any different as regarding the appearance and overall build. The Uhans K5000 is thick (14.2 mm) and has a rough body made from polycarbonate. The body was put together in a way that makes the Uhans K5000 shockproof, dustproof, and drop proof.

The device is also accompanied by an IP68 certification which confers a certain level of water resistance on the Uhans K5000. What’s however super unique and outstanding about the waterproof nature of the device is that it can survive up to a depth of 1.5m, for up to 30 minutes without causing any damage.

The screen is a scratch resistant HD display which is sized at 5.0 inch and is protected by Corning’s Gorilla Glass 4.

Under the tough outer covering of the Uhans K5000, there is a MediaTek MT6753 processor with 8 cores  (Octa core) underneath. Four of these cores run at a speed of 1.5 GHz, while the other four, 1.3 GHz. Pertaining to OS, the K5000 comes out of the box with the Android v7.0 Nougat OS.

Complementing the processor is the 3GB of RAM for fluid multitasking and 32GB of internal storage; which can be expanded to 128GB via Micro SD card.

The Uhans K5000 features a 13 Megapixels camera on the rear and a LED flash which sits comfortable in the middle of the lens and the fingerprint scanner. The front camera in charge of selfies is only 5 Megapixels, and with no LED flash.

By now, you should have guessed why the device is codenamed the “K5000”. Well, the manufacturer named the device after its huge battery capacity of 5,000 mAh. It gets more exciting. The device’s supports the Fast Charge technology meaning in less than 2 hours, you should get a full charge of the K5000 from 0%.

The Uhans K5000 is expected to launch officially later in November and would cost about $165. A fair price for 3GB RAM and a huge 5,000 mAh battery of you ask me.