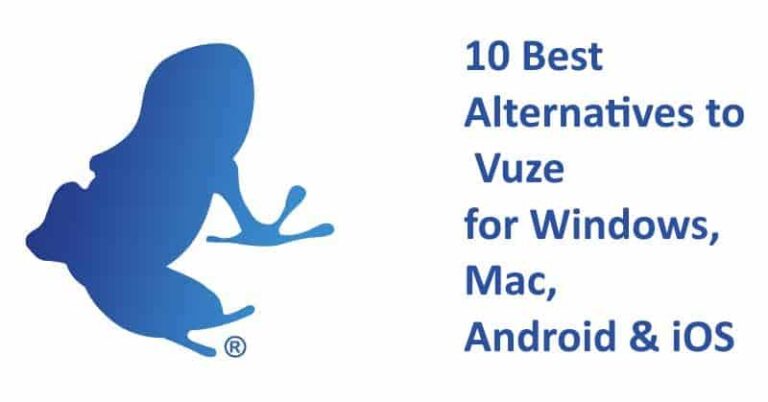 Do you want to find the best alternatives to Vuze? Well, we’ve got you covered because we’ll give you a list of the 10 best apps and programs similar to Vuze that you can use on Android, iOS, Windows, and Mac.

You can use these to make it easy to download torrent files. So, let’s get started without further ado.

The Best Alternatives to Vuze for Torrent Files

Even though Vuze is one of the torrent clients with the most features, the free version has a lot of limitations. On top of that, this popular tool isn’t available for Android or iOS. Some of the reasons why people often look for alternatives to Vuze are the ones listed above.

If you are one of these types of people, this article will help you. Here are 10 great alternatives to Vuze that you can use right away. So, here is our first option.

If you want a free alternative to Vuze that is both powerful and easy to use, Deluge is a great choice. The first version of Deluge came out in 2006, but it took about seven years to get a stable version.

The best thing about this tool is that it is open-source software, meaning anyone can easily download, change, or publish it.

What I liked most about Deluge was that it lets users improve its functionality by installing different plugins, but this takes time. Overall, Deluge is a good alternative to Vuze for people who want a more reliable, powerful, and free torrent client.

BitComet was also created in 2003, and since then, developers have made several versions of it to add more features and make it more stable. BitComet is a good thing because it is a free torrent client that doesn’t have any ads on it.

It is rare for free torrent clients to do this, which makes BitComet a good competitor to Vuze. BitComet was only available on Windows OS at first, but they now have software for macOS as well. They also have an Android client, but it seems to have some bugs right now.

uTorrent is one of the most popular and frequently used torrent clients. It was made by BitTorrent Inc. so that people who use the torrent protocol could easily share and download files.

This tool is miles ahead of its competitors in terms of features, users, speed, and other things. This torrent client has many features and is used by more than 160 million people worldwide. This makes it the most popular torrent client.

The best thing about uTorrent is that it doesn’t take up much space on your computer. It’s about 4 MB, making it one of the smallest torrent clients on the web. Also, uTorrent is available for macOS, Linux, Windows, Android, and almost all other popular platforms.

The free version of uTorrent has some restrictions and adware, but users who want to get rid of these restrictions can pay $19.95/year for uTorrent Pro. It is a good alternative to Vuze.

BitLord is another popular torrent client that lets you download and share files over a peer-to-peer network. BitLord’s first versions were based on BitComet, but versions 1.2 through 2.3.2 were based on Deluge.

But after version 2.3.2, BitLord added a few new features to set itself apart from BitComet and Deluge. It is also a torrent client that is entirely free to use.

BitLord only works on Windows and macOS computers at the moment. So, BitLord is not an option if you are looking for a Vuze alternative for Linux or a smartphone.

Even though it’s a free tool, it has many paid features, like streaming content before downloading it, encryption, bandwidth control, scheduling downloads, and more. But there are ads on it, and there’s no way to get rid of those.

The BitTorrent protocol’s official client software is called BitTorrent. Since its first release, this tool has gotten several updates that have added many new features.

BitTorrent supports magnet links, encrypted connections, private torrents, and remote access through its web interface, all of which make it stand out. BitTorrent also has a clean interface that is easy to use.

Some of the most important things about rTorrent are its ability to prioritize and choose what to download and its support for magnet links, super seeding, PES, and other things. rTorrent also works with every major operating system except Windows, Android, and iOS.

The good thing about rTorrent is that it is a free torrent client that you can easily get from GitHub. Even though this tool is freeware, it doesn’t have any ads, which is good.

rTorrent seems to have the right features for a simple torrent client. But rTorrent is not the right choice if you want a Vuze alternative with more advanced features.

BiglyBT is the youngest of the best Vuze alternatives on our list. It first came out in 2017. It’s a continuation of the Azureus (also known as Vuze) torrent client, and it’s free and has no ads. The people who made Azureus are working on and running BiglyBT.

Even though it doesn’t have all of Vuze’s features, it still has everything you need to share and download files over a peer-to-peer network. BiglyBT has a very easy-to-use interface that is clean and easy to understand.

It works on many different platforms, like Windows, macOS, Legacy OS, Linux, FreeBSD, and Android. Even though it is a small and easy-to-use torrent client, it has many great features.

Users can play media files before downloading them, limit downloads by tags, network, peer-set, and many other ways.

Tixati is the best free alternative to Vuze on our list because it has the most features. It has a user interface that looks like it’s from the past. This makes the UI feel a bit old. But the good news is that the tool is easy to use.

Because it has so many configuration options, it is a very flexible and useful torrent client. It’s rare for free torrent clients to have this many features, so it’s a great free Vuze alternative for tech-savvy people.

It promises “No Spyware, No Adware, No Nonsense,” which makes it a great choice for people who care about their privacy.

qBittorrent is one of the few lightweight torrent clients with a clean, ad-free user interface and so many useful features. It’s a great reason to use qBittorrent instead of Vuze.

qBittorrent can be used on macOS, Windows, FreeBSD, and Linux, among other major operating systems. But it doesn’t work on mobile platforms right now. This tool’s easy-to-use interface makes it look a bit old-fashioned.

But putting that aside, qBittorrent has many great features, like a built-in media player, the ability to encrypt files, a search engine to find files, the ability to give any torrent priority, and more.

Bitport.io is the last tool on our list. It is a torrent client that has only been around for a short time. Even though Bitport is new to the market, it has managed to get a lot of users and make a name for itself.

Before we go any further, I want to let you know that this is unlike any other torrent client. It doesn’t even have a client. Instead, it is a cloud-based storage service that lets you download and stream torrents over the air.

It is a new way to download torrents that is based on the cloud. Users can save torrents in a safe place on their computers or on their Google Drive. It keeps your IP address safe and encrypts your connection when you connect to torrent servers and get torrents.

Since there is no client to install and the service is web-based, you don’t have to worry about whether or not this tool will work with your device. The bad thing about this tool is that it costs a bit.

So, that’s it for the best alternatives to Vuze. Vuze is a popular torrent client, but annoying ads, a closed-source program, and the client’s large size have made people look for other options.

There are a lot of great alternatives to Vuze that can compete with it right up to the wire. Also, the right tool is totally based on what the user wants to do. So, I decided to put together a list of the best tools that you can use instead of Vuze.

Please keep in mind that I didn’t list the tools in order of best to worst. All the tools on this list have their good and bad points. So, it’s up to you to determine which tool will meet your needs.

Now that I’ve said all that, I’m going to end this article. I hope it helped you find something better than Vuze. If you have any questions, you can leave them in the section below. Our team will answer all of your questions as soon as possible.