Table of contents: show
1 1. No Carrier Bundled Apps
2 2. Fast Sharing To Other iPhones
3 3. Worth More When You Resell
4 4. iMessage, FaceTime & FaceTime Audio
5 5. iPhone Apps Are First and Better Looking
6 6. iPhone Updates For All Users
7 7. Much Faster Than Android
8 8. Best Cameras
9 Conclusion 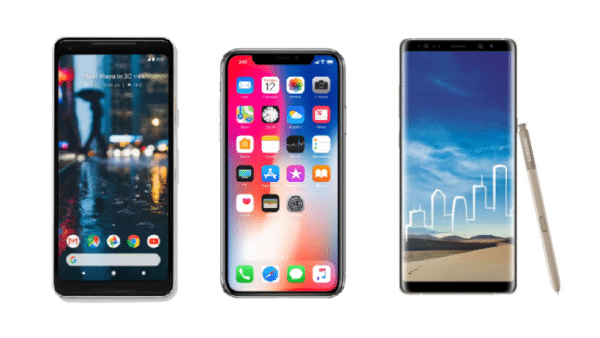 This is more than the operating system, but the overall features, starting from the body to what’s underneath. Apple’s iPhone delivers a much better experience than Android in so many ways, but this doesn’t mean there aren’t places where the Android strive. Without further ado, these are the 8 reasons the iPhone beats Android phones.

Android phone promises “freedom” but at the same time there are always unnecessary carrier apps installed on the device which can’t be uninstalled. Unlike the iPhone which comes with just important apps like the Apple Watch and Apple News app. The iPhone isn’t that perfect when it comes to pre-installing apps, but these apps doesn’t take up much storage space unlike on the Android.

Furthermore, most of the Apps pre-installed on the Android might never be used. You can’t uninstall them, you can only disable them, but they still consume storage space. This might not be a problem at first, maybe after some months when you need more storage space and you can’t delete an app you’re not using.

2. Fast Sharing To Other iPhones

With the AirDrop on the iPhone and other features as well, sharing between iPhones is simple and easy. Apart from files, you can also share your location with friends on the iPhone. It only takes a tap or two from the iMessage and you can share your location, unlike on Android where you have to download third party apps like Whatsapp to share location.

Sharing photos, links or files is also simple with AirDrop on the iPhone without downloading any app. An Android user will have to download other apps like Xender, to be able to share files. This might seem like a little thing, until one of your friends switch to Android and you want to send files. It’s very possible obviously, but not as hassle free like between iPhones.

3. Worth More When You Resell

An iPhone is a valuable asset that depreciates slowly in value than the Android. In Nigeria, the iPhone 7 was selling between N250,000 to N300,000 in 2016 when it was launched that year. The Samsung Galaxy S8 debuts at the beginning of the next year, and retails at the same price. But in 2022, the iPhone 7 still maintained its selling price of almost two years, while the Galaxy S8 now retails between N200,000 to N230,000. That’s just Samsung, other Android phones would have lost almost 50% of their worth in a year or two.

Making it another reason the iPhone beats Android, as the iPhone holds its value better than any Android phone. Even the iPhone 6 still has much value than other Android phone released the same year with the same price tag then. Whenever you want to sell an iPhone, be ready to get at least 80% of the money you spent, but on Android you would barely get up to 70%.

With these features listed above, you could easily communicate and interact with other iPhone and iPad owners seamlessly, without downloading an app. These trio of services enables fast and simple connectivity, with the iMessage, users can send longer messages at one time and the messages can deliver to any Apple device the receiver owns. Make video calls to other iPhone users without downloading any app thanks to FaceTime.

The feature delivers an excellent way to video chat and by far better than Google’s Hangouts. FaceTime is built into the phone, making it very easy to switch from regular phone call to video call by just tapping on a button. FaceTime Audio helps iPhone users to talk without video by using data to make an audio call. Unlike on Android, where you need to use third party apps like Whatsapp and the rest.

This isn’t even a debate, another reason the iPhone beats Android. Apps are first available on iPhone before being on Android, although we’re now seeing more apps come to both Android and iPhone at the same time. But this isn’t always the case, it’s always obvious how iPhone users get special treatment when it comes to the availability of top games and apps. Instagram was available on iPhone for over two years before finding its way to Android.

Even when apps are finally available on iPhone and Android, we always see a much better and attractive design on the iPhone version. This has been happening for years now, when a video sharing app “Keek” was available on both platforms in March 2012, only iPhone users could send direct messages, Android users couldn’t. We also see this in the modern day Snapchat and Twitter, both apps look much better on iPhone.

6. iPhone Updates For All Users

Might seem stale to Android lovers, but the fact that all iPhone users get the latest operating system update is one of the reasons iPhone beats Android. Well, if the iPhone is at least three years old, unlike the Android when if your device is 18 months old, you may need to buy a new Android smartphone to get the latest software.

According to Mixpanel, after a week Apple launched iOS 11, it was already reportedly installed on 25 percent of iOS devices. While Android Central reported that Android Nougat was just on 15 percent of Android devices in September 2017. That’s disheartening, even when Android Nougat debuted in August of 2016. Simply put, If you really want to get the Oreo or Android P experience as an Android user, there’s a huge chance you’ll be changing your device soon.

7. Much Faster Than Android

The A11 Bionic chip on the iPhone 8, iPhone 8 Plus and iPhone X makes these phones faster than OnePlus 5T, Pixel 2 XL and Galaxy Note 8 combined. The chip is faster than any Snapdragon or Huawei’s HiSilicon chip on any Android device, don’t even get me started with Mediatek’s most powerful chip.

Apple’s flagship chipset boasts of huge wins in synthetic benchmarks such as Geekbench 4 and 3DMark. Beating the Galaxy Note 8 and Pixel 2 XL when editing 4K video and opening large files. iPhone doesn’t have unnecessary apps running in the background like the Android, offering a smoother experience.

Definitely one of the best reasons iPhone beats Android, they always have the best cameras obviously. The iPhone 6 released 4 years ago with an 8MP shooter boasting of f/2.2 aperture lens captures natural looking photographs than most Android devices. Although Samsung holds the camera phone crown for two years straight now, especially with the launch of the Samsung Galaxy S9 and S9 Plus.

But in general, iPhone cameras are much better overall. With the iconic shooters on the iPhone 8, iPhone 8 Plus and iPhone X, the Galaxy S9 and S9 Plus will have to do more than enough to beat the competition. Even though the Pixel 2 XL wore the crown on our list of the best smartphone cameras in the world. The iPhone X takes more natural looking and clear photographs even in the Sunlight with its portrait mode.

These are the 8 reasons the iPhone beats Android, there are also some cases where the Android might dominate as well. But if you don’t want to be a second-class app citizen and you have the money to spare, then go for it, the iPhone is still the king. You can let us know which one is better in the comment section below by stating your reasons.