Mid last month (July 2017), Airtel surprised customers by releasing what quite a majority of Nigerian internet users have somewhat been clamouring for; an unlimited internet plan.

Majority of Internet users just want to do as much work, fun and other stuff on the internet without having a restriction as to how much they can do. Hence the clamour for an unlimited internet data plan. Some native Telecommunication companies have unveiled unlimited internet plans in the past, but this one from Airtel is particularly the “deal”. 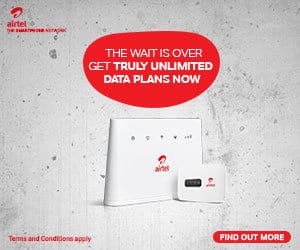 What do you think about Airtel Unlimited data plans? And who else is expecting a weekly or daily unlimited plan from Airtel? I am. Are you?