According to a list of names/models leaked by AnandTech today (24), Intel would be planning to launch a Core i9 notebook chip. This component appeared under the name “i9-8950HK“, which indicates that the processor is still part of the 8th generation of processors of the brand. Whereas several Coffee Lake desktop chips hit the market a few months ago and the 9th generation models are about to show up, the whole situation can be a bit confusing.

Still, the presence of a Core i9 chip in the notebook market may be suitable for Intel in the marketing sense. There are not many leaked details about this chip yet, but the suffix “HK” in the name indicates that it can be used for overclocking. It is expected that this model will contain 6 real cores with the possibility of simulating 12. There would be 12 MB of L3 cache and  TDP (maximum amount of energy to be dissipated as heat) of 45 W. On paper, the specifications – for now – do not differ much from i7 or i5 on the same line. 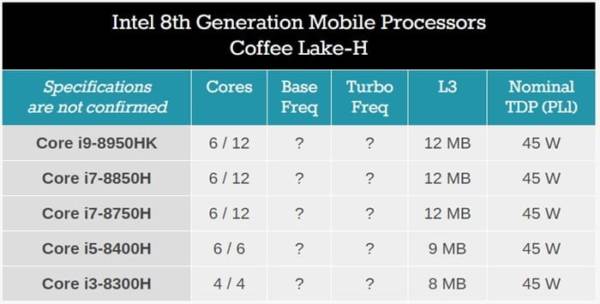 The i9 would follow the same configuration as the i7, but with some extra features to justify the different nomenclature.

AnandTech sources explain that the mobile Core i7 chips of this generation will be made in the Coffee Lake-H microarchitecture and not in the upgraded Kaby Lake, probably because of the TDP of 45 W. There is also talk of the possibility that these new chips follow the same amount of real cores from their desktop counterparts that have been or are about to be released. That is, the Core i3 would be quad-core, the i5 hex-core, and the hex-core i7 with hyperthreading. In this context, the i9 would follow the same configuration as the i7, but with some extra features to justify the different nomenclature.

The list also brought a fair amount of names for desktop processors, including some that have already been released. The highlight here is the fact that Intel has reorganized the nomenclature of low-cost processors. The Core i models remain the same, but the Pentium were split between Gold and Silver, with Gold being in the Core architecture, and Silver in the Atom. The Celeron were also divided in a similar way. Check the table.

Models with (*) already on the market

About the ninth generation of chips from Intel, we know very little, but the leaked list brings only models of desktop processors, with information limited to the Core line. It is possible that the manufacturer will reveal more details about these processors during CES 2018, but for now, speculation about them is as follows – the name should be Ice Lake, but there are differences in this regard since previous confirmations and leaks have put a little of confusion in this until then organized nomenclature. 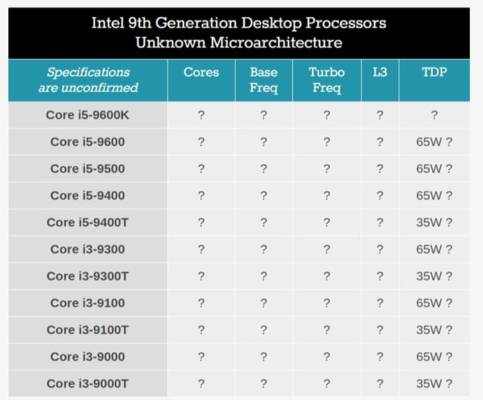 There is a possibility that these chips will hit the market with 10 nm lithographs, but most likely they will remain in the 14 nm range, the same as today’s models. In that case, Intel would have to come up with alternative improvements to justify the generation change.