Initially, the manufacturer of this tablet – Verykool started out as a distributor of products supplied by top OEMs like Samsung, LG, Novatel and the likes. Five years ago, the distributing company entered into the manufacturing line of business. The Verykool Kolorpad LTE TL8010 comes in with a blend of nice shooting prowess as well as the highest form of network connectivity – 4G LTE. Its American owners even made the tablet a very affordable device. Let’s take a closer look at the Verykool Kolorpad’s LTE TL8010 tablet. 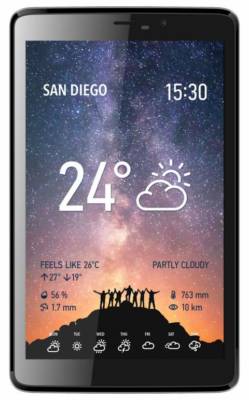 The tablet’s portrait design makes it very comfortable to handle. The top bezel of the tablet is home to the front camera as well as the earpiece. The rear of the tablet houses the rear camera at the top central position while the “verykool” logo is seen in the central portion of its rear’s bottom quadrant. The tablet’s speaker is located at the bottom left corner of its rear. The tablet has an average weight of 335 g with the dimensions 211 mm x 125.3 mm x 8.5 mm. The tablet comes in a single Gray colour.

Its screen display has a size of 8.0 inches. Its touchscreen has the IPS LCD origin. The tablet’s touchscreen has scratch resistance signifying that the touchscreen will have its fresh outlook for a very long time. Its low 189 ppi pixel density as well as its screen resolution is accountable for the sharpness of the texts and icons on the tablet’s display. The display area of the tablet has 70% screen-to-body ratio. MiraVision picture engine is an additional feature that makes the tablet’s colour production to be excellent.

Being a budget device, it has a Quad core processor that clocks at 1.0GHz. Its really low processor speed is the last thing one would ask for in a tablet. MediaTek MT8735M is what functions as the tablet’s chipset. This four-cored processor also comes along with an ARM Mali GPU for the graphics production.

Verykool kolorpad LTE TL8010 runs on the Android 5.1 Lollipop OS. Its UI is modified based on the Android Lollipop OS. The rear camera of the tablet has 8MP quality. This camera come with the f/2.8 aperture which is same as its front camera. The tablet’s rear camera comes with a LED flash. The fore camera has a 5MP shooter for taking selfies. Sadly, the front camera lacks a LED flash.

This tablet has 4G LTE network type enabled on it. The other network types on it are 2G and 3G network types. USB connectivity, Wi-Fi, Bluetooth v4.0 and GPS are what sums up the connectivity on the tablet. A non-removable Lithium Ion 4,060 mAh battery is what serves as the duration source of Verykool Kolorpad LTE TL8010 tablet.

What is The Current Verykool Kolorpad LTE TL8010 tablet Price and Availability Status?

You can click on the links below to view latest Verykool Kolorpad LTE TL8010 tablet price & availability.