Continuing in the tablet review series, my next “port of call” is the Chuwi Hi12. This is another interesting tablet from the Chinese manufacturer. Already we’ve seen the Chuwi Hi8 through to Hi10, now it’s the turn of the Hi12. 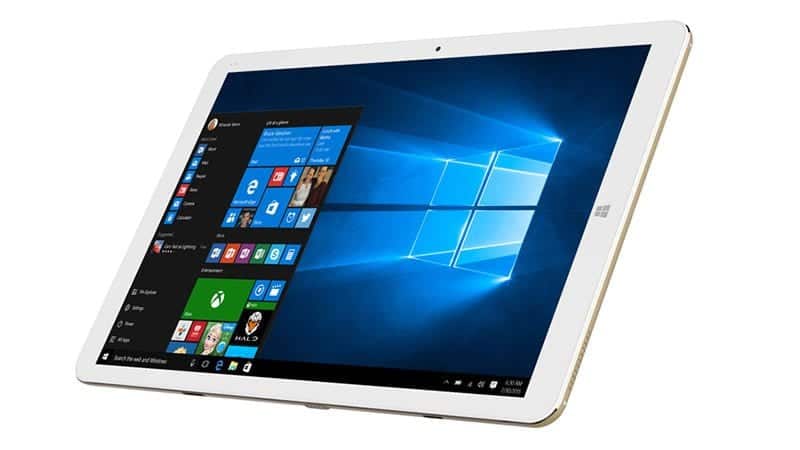 From the naming convention of these tablets, one thing stands out – the model number tells a little of the display size. While the Hi8 tabs featured 8” displays, and the Hi10 coming with at least a 10” screen, then you should see a pattern there. Therefore, in the same convention, the Hi12 tablet comes with a 12 inch display.

It is important to note that there are two versions of this tablet. There’s a new dual-boot version that comes with Windows 10 and Android 5.1 pre-installed – which is the one I’d be reviewing. And there’s an older single OS variant with only Windows 10.

No doubt the Chuwi Hi12 is a large device due to the massive 12” display. Chuwi decided to use a metal alloy all round instead of plastic. This metal body makes the Hi12 have a premium look (unlike the other plastic Chinese tablets). The bezels on the device are just OK. The device weighs 852 grams and comes in a sleek and slim package with a maximum thickness of 8.9mm. The thickness of tab is mainly as a result of the battery size – an 11,000mAh battery for longer operating time. 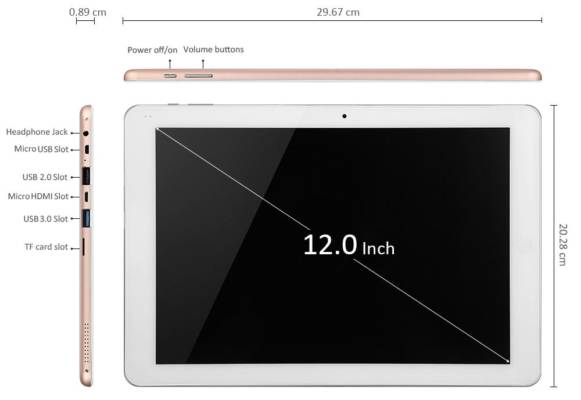 There is also the presence of two full-sized USB ports on the Chuwi Hi12. One of the ports is a USB 3.0 and the other USB 2.0.

The 4GB RAM and 64GB ROM combination from the predecessor – Hi10 – is still retained in the Hi12. The RAM is a low-power one that cuts power consumption while improving performance. The 64GB internal storage should be enough for a basic user, but can also be expanded to128GB via a microSD.

Windows 10 + Android 5.1 combination is almost a norm now with Chinese tablets. The Hi12 does not stray from this trend. The Hi12 comes with a full Windows 10 desktop OS with Microsoft Office, Cortana, Edge browser and a couple of other apps pre-installed. If you are not satisfied, you can also switch to Android OS at the tap of a button.

Processor and GPU in the Chuwi Hi12 are still the same as those used in most of the previous Hi series tablets. The Intel Atom X5-Z8300 Cherry Trail processor with a clock speed of 1.44GHz is used in combination with the 8th gen Intel HD graphics processor.

The processor is sufficient for running basic tasks like web surfing, editing documents and so on. The device does multitasking pretty well with light applications, but becomes noticeably slow when running many apps at a time.

The Hi12 uses a 12” display as has already been stated. The display panel used is not fully laminated, thus, making it vulnerable to reflections (although the screen is clearly visible under direct sunlight). However, the display resolution is 2K (2160 x 1440 pixels) which offers high quality images.

The Hi12 uses an 11,000mAh battery that delivers well for most tasks. Average battery life is about 6-8 hours on a single full charge. Users can get around 4 hours of battery life on gaming, about 7 hours on web browsing, and maybe up to 9 hours on video playback. Overall, battery life is outstanding for a device with such a large screen.

To get the battery fully charged from 0% takes about 3 to 4 hours when the device is off. Chuwi added a 3A charger here so as to reduce the charging time by 20%.

Great battery life, high-resolution and large display, dual-boot OS, full-sized USB ports; these are some of the high points of the Chuwi Hi12 tablet. Intel Atom X5-Z8300 processor, bad audio, quite large and heavy tablet; these are just the few drawbacks for this otherwise great tablet PC. Overall, the Chuwi Hi12 tablet PC is a great device and at a really good price, the tab would be a steal.