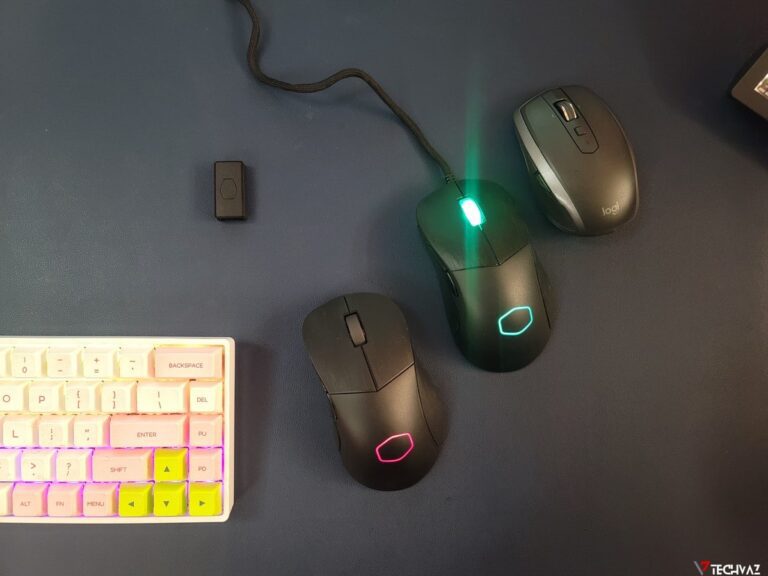 The Cooler Master MM731 Wireless Gaming Mouse that’s known for its ability to minimize interruptions when in use. It is a lightweight, wireless product that comes with such a simple design that endears it to the hearts of many users. Checking out the cost of this mouse, that’s quite less than $100, it’s safe to say that it is one great contender in the computer mice market.

There are several features in the MM731 that should receive a buyer’s attention. But it will do some damage if we fail to also outline some of the flaws that hinder this product from matching up to the best mouse out there on the market.

People who are used to the MM731, know that this is a no-nonsense gaming mouse that favors FPS gamers in its simplicity. Checking out the design, we see that there are two switches on top of it, a scroll wheel, and an RGB-backlit Cooler Master logo. Looking further, we see two thumb switches on the left-hand side. We turned it over to reveal a Bluetooth/USB/2.4GHz switch, LED status light, a pairing button, and also a DPI switch. It is just as the manufacturer had depicted it at its release last year. It comes with a USB wireless dongle that you could put away in a small slot when not in use.

The RGB lighting is restrained, such that some users may not like it. It takes the shape of the Cooler Master logo. This mouse is bereft of sharp angles. Instead, it presents smooth ergonomics and a modest color structure.

The wireless gaming mouse comes in simple packaging. There you have exactly what you need to enjoy the product. To set it up, notice that it lights up as soon as you plug it in. There’s a switch at the underside to enable the wireless functionalities. You can operate it easily from under the mouse. Take note that the pairing button must be pressed and held down for the mouse to be discoverable on your device.

Downloading the MasterPlus+ software may not be one of the first things you do to start using your wireless mouse. You can enjoy it without the software. However, for you to get the most of it, you may need to download the software.

These products (MM730 and MM731) pride themselves on being surprisingly lightweight. It has to be understood that the MM731 is a bit heavier when compared to the wired MM730. This product under review weighs 58 grams when you weigh it without the cable and the dongle. It is lighter than many gaming mice out there.

MM731 is designed for better grip

A gamer’s grip is very important. Cooler Master knows this, and the company did everything for the gaming mouse’s overall design to fit into the gamer’s grip. However, both the slope at the left side of the mouse subtly works against the proper grip that a gamer would love to have. Most users find the device comfortable to grip, anyway, except for those with remarkably large hands.

This is one area that makes users won’t use the product. The wireless technology works well and looking at it, the 2,4GHz is provided by a small USB type A dongle. It instantly connects your PC to the mouse once it is powered on. Most users know that there’s no latency with this connection. It doesn’t really matter where you plug it. Anyway, users have reported super performance when it is plugged at the rear I/0 of your PC.

This connection method is also available but not as potent as the dedicated 2.4GHz connection. When you need to play the ‘bigger’ games, a Bluetooth connection could mar your enjoyment of the game. For one thing, the polling rate is greatly reduced on Bluetooth. However, this connection may come good when there are no ports available or the ports available on your device are occupied. It is also good to state that this Cooler Master Gaming mouse wins in this aspect against the Logitech G Pro Wireless Superlight.

The sensor is stationed to help the user track his or her movements during gaming time. In this product, it works nicely. The sensor is also well-placed, in a position where most users may not be bothered about its existence. The positioning allows gamers who wish to align the sensor with the tip of their fingertips for maximum accuracy to use. It sits further forward than other sensors from other gaming mice.

Cooler Master made things simple by releasing only two colors – black and white. Another variant of the MM731 is the MM730 which is wired. The latter is more lightweight than the wireless edition we are reviewing here. Because they look very much alike, it is easy for one to mistake the MM730 for the MM731. But the best way to quickly identify them is to recognize that one is wired, while the other is wireless.

The feet of the mouse offers a good gliding experience. Some reviewers said in their own case it was stiff. That also isn’t the case in general. The feet come with Virgin Grade PTFE. It is generally agreed that the MM731 glides well on mousepads when placed directly on desks, even though they could make a slight scratchy noise while using them on those surfaces.

This is the main software used for updating the MM731, and other versions of the Cooler Master mice to the latest version. Users have to first toggle the bottom switch on the mouse to 2.4GHz mode and then make sure the dongle is plugged into the PC. You can download the software here. Be assured that when you download from that link, you are getting the latest version of MasterPlus+ for your MM731 gaming mouse.

This is celebrated as a bridge between an ambidextrous mouse, and a right-handed ergonomic mouse. This is true because its shape and curves show that. Its low height nudges the right hand into a palm grip position that most users have found comfortable. The mouse is also adaptable to other positions.

MUST READ ⇒  How Can I Right-Click On My iPad Without A Mouse?

When the users combine the Teflon feet, the sensor, and the weight together, it is easy to admit that overall, the mouse feels balanced in the hand. The mouse feet aren’t too loose but it is very smooth.

The polling rates on MM731 are as follows: 125Hz, 250Hz, 500Hz, and 1000Hz. If the device is in Bluetooth mode, the polling rate is automatically locked to 125Hz. The CPI can be adjusted to 19000, or the user can set it as high as 38000 using the MasterPlus+ software. To avoid inaccuracy during faster movements, users may adjust by setting their intended CPI between 17 percent and 25 percent higher than what is normal.

The product relies heavily on this MasterPlus+ software for customization options available that can either increase or decrease the brightness and movement of the light when a player moves and clicks the mouse. However, fans of LED customization may find this featureless in appeal. The majority of options are inaccessible without this software download and use.

This wireless version sells for $81.73 on Amazon. Some people believe that it should have been sold lower, say, at about $60. Even at that price, they think that the MM731 would face stiff competition from Razer. The price tag is too much for some who think that the wireless gaming mouse market is saturated with a few better options.

Initially, there were reports from users on the internet that states users were experiencing motion latency issues with the MM731. The error has been corrected in recent units. If you still make use of old units that you bought, you can update the firmware through Cooler Master MasterPlus+ software. It solves a lot of issues.

The following comparisons will also serve as a way to understand other top contenders in the wireless gaming mouse market. You may determine which is your best FPS gaming mouse, and the best lightweight mouse.

If the MM731 is an exceptional lightweight wireless gaming mouse, this one is an excellent wired gaming mouse. It is not as light or as sturdy as the MM731.

But the Glorious Model D is known for the following:

Both are wireless gaming mice that have nearly identical weights and comparable performance. Logitech wins in some areas:

On the other hand, the MM731 is good in the following areas:

ROCCAT is also a wireless gaming mouse just as the MM731 is. The good thing is that they also have comparable performance. Compared to the ROCCAT Kone Pro Air the MM731 is:

On the other hand, the ROCCAT:

These comparisons help anyone interested in figuring out which one of these products is the best for him or her.

He encourages buyers to update the firmware. There are many videos and comments online that constantly bash the motion delay, which has been corrected through a frequent firmware update. If the user wants to enjoy the product, he or she must update the wireless gaming mouse with the help of MasterPlus+ software. Using this software to update the mouse makes the response time better than it used to be.

The mouse enthusiast claims it depends on what program they use. For the MM731, he recommends that new users avoid opening and using it without making use of the software to update it.

This reviewer gives the product 3 out of 5 stars, saying although it is a decent wireless gaming mouse, he has a few issues with it. He bought the black wireless mouse but he’s had issues with the motion delay when using the mouse in wireless mode.

There are nice things to write: about the MM731

There are also negative things he wrote about the MM731:

This review doesn’t recommend the product to other would-be buyers.

So much of the negative information regarding the Cooler Master MM731 Wireless Gaming Mouse that you see online in articles and videos belong to the past. The team at Cool Master has been doing a great job, working on giving users a wireless gaming mouse that they can be proud of. Once you unbox your own mouse, make sure that part of setting it up includes downloading the software and updating it so you can enjoy the latest version of the mouse without losing out on the latest features.

*Not their real names