Do you relish the experience of switching between OSes on a tablet PC? If yes, have you considered the Cube iWork Ultimate 2-in-1 tablet PC? This device is kind of cool with some nice features that blow other tablet PCs in the same price range out of the water.

In this piece, we shall have a look at some of the amazing features of this lovely sub $200 device.

The Cube iWork10 Ultimate comes with a sleek design. It is pretty slim at only 8mm thickness. Weighing 616g, it can be heavy on the hands, but it’s still light for a tablet PC. The rear is made of a metal alloy with a blue matte finish.

With the Cube iWork10 Ultimate, you are provided with just enough storage space for your work. The internal storage is a 64GB eMMC – although you actually get less than that, while the RAM is pegged at 4GB (decent for most Windows apps and more than enough for Android). The internal storage can also be expanded through a microSD card.

The iwork10 Ultimate or iwork10 Flagship (as it’s known in China) comes preloaded with the Windows 10 OS (64-bit) and Android 5.1 Lollipop.

The Windows 10 experience on the device is pretty decent due to the entry-level processor used. Working with Windows 10 on the iWork10 allows you to take up your office work with you wherever you go. The new Edge browser for the Windows OS offers a fast and improved web browsing experience. There’s also Cortana, the VA (virtual assistant) that is ready to answer all your questions.

However, when running Android on the device, it performs really well. The Android OS ROM on the device is a stock one. Initially, when the device was released, it didn’t come with the Google Play services pre-installed, but that has been fixed now with an OTA (over the air) update.

This device packs an Intel Atom X-5 Z800 Cherry Trail based processor clocked at 1.4GHz (speed can reach up to 1.8GHz), and an 8th gen Intel HD graphics processor.

A large 10.1” IPS display at a resolution of 1920 x 1200 sits in front of the Cube iWork10 Ultimate. The display has a wide viewing angle and gives beautiful colours. The touchpad and touch panel are also made to be highly responsive to touch. You can get a stylus pen for use with the tablet PC as it supports 256 pressure sensitive handwriting, allowing the user to use the pen on the screen accurately. 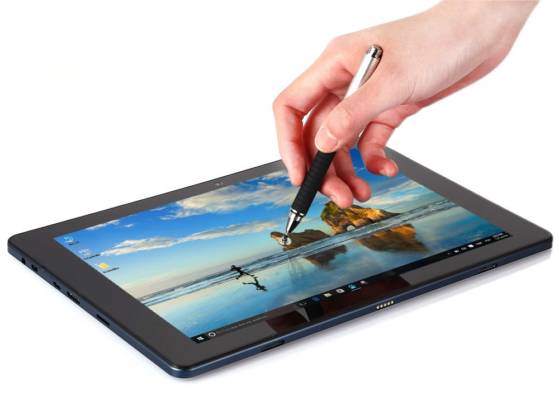 There is the presence of two 2.0MP snappers at either side of the device. The front camera can be used for video chatting and the rear camera for taking decent photos and videos.

Cube included a battery of 7500mAh capacity with this tablet PC. Ordinarily, that number might seem high, but when you take the screen size (10.1”) and the screen resolution (1920×1200) into consideration then that battery capacity is really small. The manufacturer says that the estimated time for a standard usage is about 6 hours and 42 minutes, but this value can vary depending on what is been run on the device.

If you are in the market for a sub $200 tablet PC and don’t care so much for quality, then you can add this device in your bucket list. This tablet PC offers the advantage of switching between two OSes, allowing you to work or play as you desire. You can enjoy the complete PC experience when you get a docking keyboard for it. Although the Cube iWork10 Ultimate packs some really interesting features, it still lacks in a few areas – like lack of SIM support; nevertheless, it is a decent device all-round at a give-away price.