Sequel to the original Shoot smartphone with dual rear cameras, Chinese manufacturer Doogee released the Doogee Shoot 2. Going by the naming convention of the phones, one would say that the Shoot 2 is an improvement on the Shoot 1, but that seems to not be the case.

Although the Doogee Shoot 2 is also targeted towards the photography enthusiasts like its predecessor, it is more like a watered-down version of the Shoot 1. Join me as we look at how this newer edition of the Shoot is different from its progenitor.

The Doogee Shoot 2 is a great device, with some aesthetic features that makes it quite attractive to hold. At 9.95mm, the Shoot 2 is thicker than its predecessor with a thickness of 8.7mm. The Doogee Shoot 2 is fairly heavy to hold, weighing 174g at the scales. You can get this device in 3 color variants of silver, black, or gold. The device looks pretty much like the Shoot 1 in a lot of ways with the presence of a physical home button with embedded fingerprint scanner, dual cameras at the back and the same candy bar form-factor. 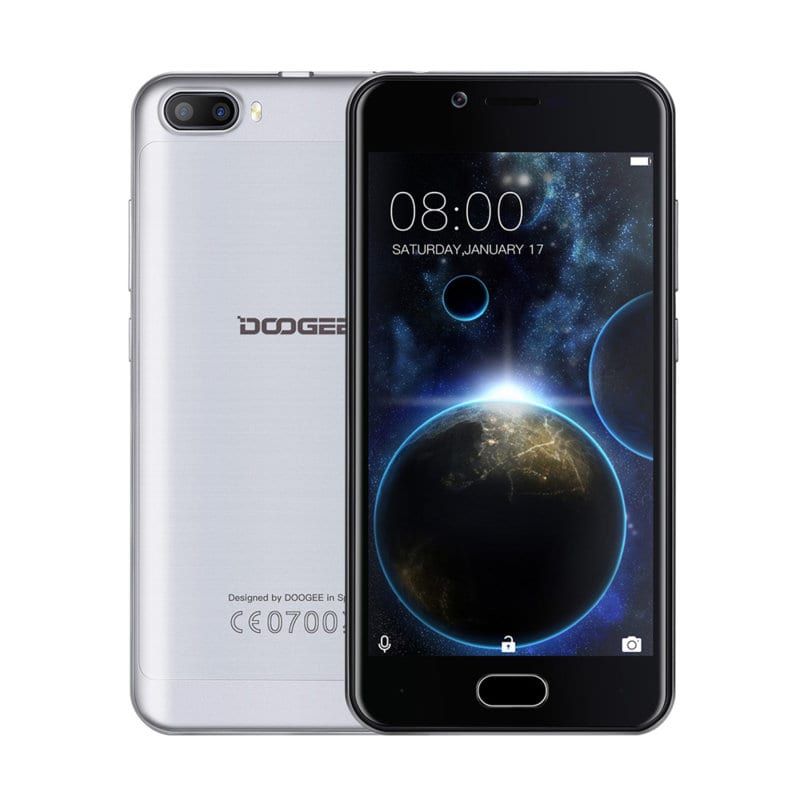 There’s a 5.0 inch HD display fitted into the device. This display allows for a wonderful visual experience. With a pixel density of 294PPI, the Doogee Shoot 2 offers a great graphical experience. Away from the 5.5 inch Full HD display found on the Shoot 1, this new device is definitely more smaller on the hands.

Doogee Shoot 2 comes with a MediaTek processor underneath. The MT6580A processor with four A7 cores at a frequency of 1.3GHz is used in the Shoot 2 and should be enough to run most of the apps thrown at it.

Users have the most recent Android OS v7.0 Nougat with this phone. The new Android OS comes with a lot of exciting features including the new multi-window feature to work on many apps at a time as well as a better user experience. You can download apps and games via the Google Play Store.

The Doogee Shoot 2 comes with lesser memory and storage space. The Shoot 1 successor uses 1 gig of RAM and 8GB of internal storage. This is exactly half of what the original Shoot device came with – 2GB RAM and 16GB internal storage. However, you can still expand on the storage via a microSD card.

Just like the original Shoot 2, the Shoot 1 also comes with a dual camera at the back. This allows for the user to experience the “bokeh” effect known in the photography circles. Unlike the Shoot 1 that features a 13MP + 8MP rear camera combination, the Shoot 2 comes with two 5MP cameras at the back. However, the same 5MP selfie camera is retained. This newer Shoot smartphone uses 2X optical zoom that is also found in the iPhone 7 Plus’ camera. This device also supports the 8X Digital zoom feature for more detailed photographs.

To keep the Shoot 2 running, there is a massive 3360mAh battery included. This is truly an improvement on the 3360mAh battery used in the Doogee Shoot 1. Given the size of the screen, this battery should be more than sufficient to last through a day on heavy usage. According to Doogee, the Shoot 2 is expected to last for 80 hours on music playback, 16 hours on video and up to 25 hours on call.

With a large battery capacity, a fast fingerprint scanner and dual rear cameras, the Shoot 2 from Doogee is definitely a great phone. If you love the Doogee Shoot 1 but can’t get due to your budget, or you prefer a more compact version of it, the Doogee Shoot 2 may just be what you need.