With the prevalence of Motorola’s first phones of the year 2017, the Moto G5 and Moto G5 Plus in the tech news, you would think that they have been launched already. However, both the devices are yet to be launched and are scheduled to be revealed at the MWC event on the 26th of February.

Even though that is still a week away, full details about the specifications as well as the images of both devices have emerged. From these, we see that the Motorola Moto G5 which will succeed last year’s Moto G4 is a mid-range device with an average size and the latest Android version, Nougat 7.0 as its OS. 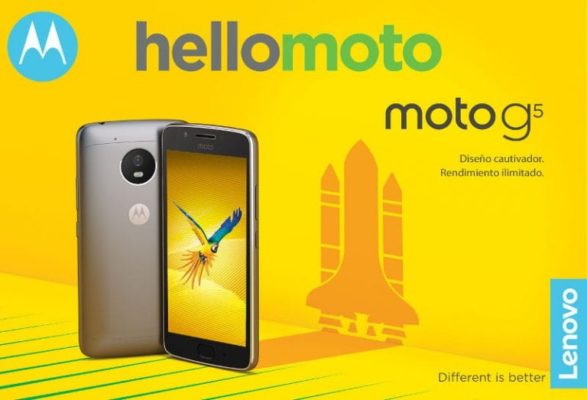 The Moto G5 has a 5-inch display which is protected with Corning Gorilla Glass 3 and has a Full HD pixel resolution. Typical of Motorola smartphones, the Moto G5 has a water-repellent nano-coating and is a bit bulky with a thickness of 9.5 millimetres and a weight of 195 grammes.

The smartphone runs with juice from its 2800mAh battery and comes with a dual Nano SIM slot with support for 4G VoLTE networks. It possesses a front-ported loudspeaker with superior audio quality.

The Moto G5 is powered under the hood by an octa-core Snapdragon 430 processor with an Adreno 505 GPU handling its graphics operations. The phone has 2GB of RAM and 32GB of internal memory which can be expanded with a microSD card.

At the rear of the G5 is a 13MP camera with PDAF and 1080p video recording capabilities, and a LED flash for visibility in low-light conditions. The phone sports a 5MP camera with an OmniVision OV5693 sensor at the front for taking selfies.

Out of the box, the Moto G5 runs on Android 7.0 Nougat which is the latest version of the Android operating system available for non-Google smartphones.

The Moto G5 would be launched alongside the G5 Plus on February 26 by 4:30 PM at the MWC 2017 event in Barcelona. Then, the price and availability details of the smartphone would be known.