Most folks wouldn’t know about this newer version probably because of the hot-selling Nintendo Switch console. However, behind the cloak of the Switch’s popularity is this portable device with the nostalgic feeling that comes with it.

Although the 3DS XL is a 3D device, the new 2DS XL is missing this feature. The absence of the 3D capability ironically means that you’ll get more battery life from the Nintendo 2DS XL.

The new 2DS XL comes in a clamshell form-factor that is resonant with the new 3DS XL. You get the normal controls with this device – two big displays, one analogue stick, and two pairs of shoulder triggers, D-pad, four face buttons, and a C-stick for adjusting camera angles while gaming. 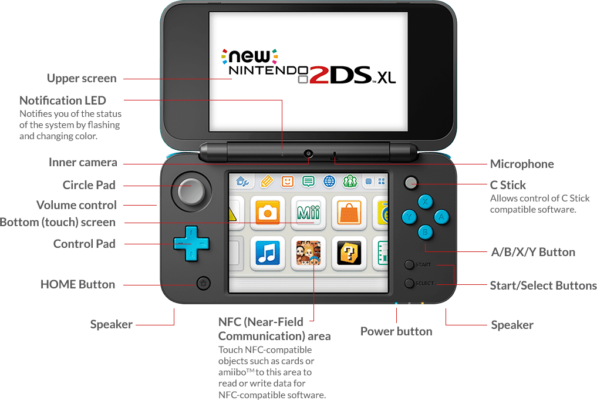 You’ll feel the lightweight build of this device at 260 grams. The top and bottom screens measure 4.88” and 4.18” respectively. For the top display, you get a resolution of 400 x 240 pixels. The front camera can be found in the middle – the hinge – away from the normal top position it used to be; while there are two 3D cameras at the back. And also, the stylus and headphone jack have been relocated to sit under the lower screen. You get the power button on the right side.

Still on the hardware, the 2DS XL has 256MB of onboard storage. The chipset contains 4 804MHz cores and another 134MHz core with a 268MHz GPU.

With this device, you get a host of software including the Nintendo 3DS Browser, Nintendo 3DS Camera, and many more.

Pricing and Availability of the Nintendo 2DS XL 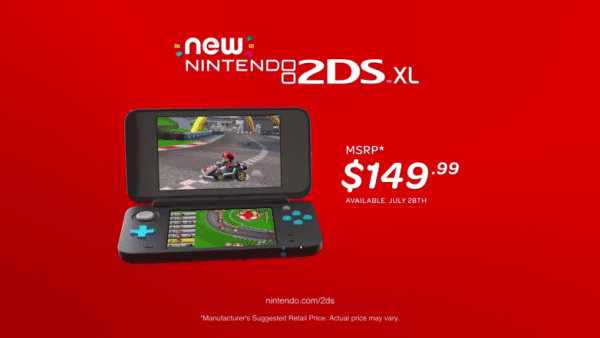 Although this device is yet to be officially released – release date is July 28, 2017, you can pre-order the Nintendo 2DS XL from here at a price of $149.99. And the best part is that you get a free 4GB microSDHC card, a stylus, and 6 AR (augmented reality) cards with the console when you preorder.

In all, the Nintendo 2DS XL is a great handheld gaming device that brings back the old-fashioned two-dimensional gaming experience. With a faster processor than the original DS console and a large catalogue of games, you’ll not be disappointed.