I presume you know how hard it could be using a smartphone with an average battery life that has you always plugging in your phone. Well, with the Oukitel K6000 Pro, that story would be history for you. With a battery that can last you a full day and even more, there’s little that one can ask for from a smartphone. Before I go on and on about how great this device is, let’s take it slow and have a look at what makes the device worth your time and probably money.

As already stated (albeit indirectly), the Oukitel K6000 Pro sports a 5.5 inch Full HD IPS display at 1920 x 1080 pixels. As a result, the pixel density for the device stands at 401PPI. To give it a premium look, the device frame is made of metal, making it look and feel like most high-end devices. Also, you should know that the Oukitel K6000 Pro comes in three colors – white, gold and grey.

If you have pretty small hands, the K6000 Pro will surely look big on them. As such it could be quite a job operating the phablet with one hand. You have the normal hardware buttons on the right side of the device, a headphone jack at the top, and slots for SIM card and microSD at the right. The speaker is located on the back of the device with the fingerprint scanner and camera. At the front of the phone is the selfie camera and some sensors above the screen with the capacitive buttons below.

The K6000 Pro comes with MediaTek’s MT6753 chipset. This now popular chipset has a 64-bit octa core processor at 1.3GHz which is paired with a Mali T720 GPU. This combination should be sufficient in running whatever is thrown at it. When you include the RAM, then the manufacturer really did a great job with the Oukitel K6000 Pro.

For software, we have the Android 6.0 Marshmallow OS. The Android OS version that is bundled with the K6000 Pro is a stock one – specifically Vanilla, offering the user an unadulterated Android OS experience. There’s also the possibility of Oukitel rolling out updates to this device; maybe users can even get Android 7.0 Nougat.

The Oukitel K6000 Pro has an internal storage of 32GB which should be enough for most of your files and apps. However, you only have about 24GB remaining when you buy the phone. For expanding the storage, you can get a microSD card as there’s a slot for it.

RAM on the Oukitel K6000 Pro is 3GB. This means that multitasking should be a breeze for you. In conjunction with the fast processor, this memory should make the K6000 Pro very fast to operate.

In essence, the cameras on the Oukitel K6000 Pro would capture images with amazing quality. However, the camera performance in low light areas is somewhat poor, but still better than most devices in the same price category.

Certainly, this is the most important aspect of the K6000 Pro. Battery capacity on this device is 6000mAh. This battery capacity should give you about 3 days of phone usage on light usage, and close to two days on heavy usage.

One drawback however, is the fact that there’s no Quick Charge feature with the device. This means that you’d have to spend about 6 hours to get the device completely charged from 0%.

Nevertheless, what can we say? With a huge battery like that, Oukitel should have included a fast charging feature to cut the charging time. We recommend you charging the phone overnight, in that way you won’t have to wait for it.

Also, don’t forget that the Oukitel K6000 Pro supports OTG reverse charging i.e you can use the K6000 Pro to charge other micro-USB devices. 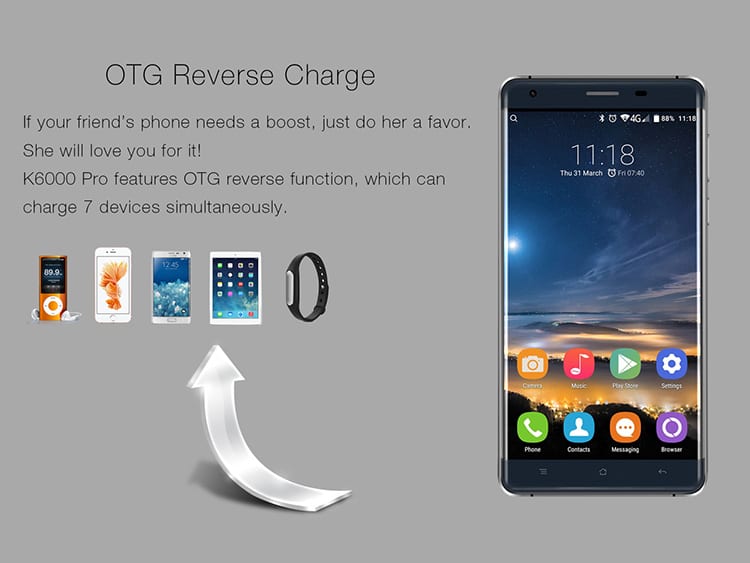 Wrapping up, if you want a device that would take you through the day on a single charge, the Oukitel K6000 Pro should do just fine. While many users may find the device to be in the middle range category, this device still performs well enough with no noticeable problems. However, the only issue we find with the K6000 Pro is the lack of a fast charge feature. Besides that this device is a great phablet all-round.