The Samsung Galaxy A01 is a low budget smartphone from the South Korean company. The handset comes with mid-range specifications and other goodies. It has average features and a capable processor that will handle day to day phone activities. Below are the Galaxy A01 full specification and the price.

In terms of body design, the Samsung Galaxy A01 is a budget device, and as such, it comes with a decent body that features and glass on the front. The smooth panel house the camera with an LED flash and other goodies as well. The device measures 146.3 x 70.9 x 8.3 mm in dimension, and its available in multiple colors.

On the front, it has a waterdrop notch that hosts the front camera. The Galaxy A01 has a screen display size of 5.7 inches with a resolution of 720 x 1560 pixels, 19.5:9 ratio and 301 PPI density for clear visuals. The display is also equipped with an IPS panel and it has a higher screen to body ratio. You will also get display protection as well.

As for the camera, the Samsung Galaxy A01 has a good shooter that consists of 13 MP wide with an additional 2 MP for depth sensor. The main camera features LED flash and it can also shoot 1080p video resolution.

On the front, it has a selfies snapper of 5 MP which will also work for video calling. The LED flash on the primary camera is for low background shooting.

On the inside, the Samsung Galaxy A01 has a midrange Octa-core processor handling its assignment at a speed of 1.95 GHz. It comes with the latest Android 10.0 operating system based on One UI 2 user interface

On the memory, the device has an average inbuilt storage of 16GB that is paired with 2GB RAM for a smooth performance. The memory is still expandable but not beyond 512GB. Sadly, the budget smartphone lacks a fingerprint scanner but comes with Accelerometer and proximity. 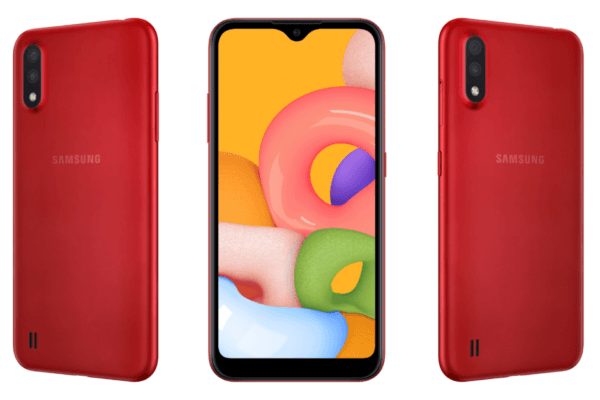 The Samsung Galaxy A01 has a nonremovable battery capacity of 3000 mAh. There is no news if the phone has support for fast charging technology or not. The juicer, however, should be able to last a full day when fully charged. The dual SIM comes with a 4G LTE network and other regulars such as Wi-Fi 802.11 b/g/n, hotspot, Bluetooth, micro USB, and FM radio as well.

Samsung Galaxy A01 Price And Availability

The Samsung Galaxy A01 is now available for purchase. The phone will cost around $125. It will be shipped in unusual colors such as Black, Blue, and Red.

So far, so good, the Samsung Galaxy A01 will make an excellent buy if you are looking for a budget device. The phone’s only shortcoming is the lack of fingerprint scanner, which is now on most midrange devices, even those below $90. Moreover, it’s coming from Samsung, and many prefer the fingerprint scanner than the native security features. Well, considering the price, it still raises many heads.