With new mobile devices flooding the mobile market every single day, Samsung is ready to leave behind the harrowing experiences of 2016 (eyes on you,  Note 7) and hopefully bounce back this year. Early last year, in the month of March to be precise, Samsung announced the latest Galaxy J7 smartphone which enjoyed wide reception for its amazing features, most especially its catchy super AMOLED display. Now rumours are rife that a successor to the J7 2016, called the Samsung Galaxy J7 2017 will be surfacing anytime soon.

These are definitely not baseless rumours as the FCC-certified device with model number SM-J727V was spotted on GFXBench not long ago, and some of its images have been posted by popular leakster @evleaks who claims that the device will be introduced on US Telecoms giant Verizon as the Galaxy J7 V, on Tracfone as the Galaxy J7 Sky Pro and in other markets as the Galaxy J7 (2017).

As the header says, the features below only represent what is obtainable in rumours as there is no official announcement of the smartphone’s specs as at now.
As is the case with most Samsung smartphones, the J7 2017 is expected to be powered by an Exynos chipset or the Qualcomm Snapdragon processor. The smartphone is expected to carry a Li-ion replaceable battery of 3000mAh capacity and run on the Android 7.0 Nougat out of the box OS.

The device’s 5.5-inch AMOLED display bears the hallmark of Samsung’s catchy display. This will come with a screen resolution of 1080 by 1920 pixels and multi-touch feature. The J7 2017 as well possesses a 3GB RAM capacity with 16GB in-built storage which is expandable up to 128GB using a Micro SD card.

The J7 V 2017 will sport a better design than its predecessor and worthy of note is the fact that the speaker grill’s position has switched to the right side of the device from the bottom where it used to be. Another feature on the rear of the smartphone is the presence of a horizontal metallic strip on which the 13MP camera sits with LED Flash. Besides these, the selfie camera is a 5MP shooter.

The Smartphone is expected to house Dual SIM slots and one other feature expected of the J7 is a fingerprint scanner. 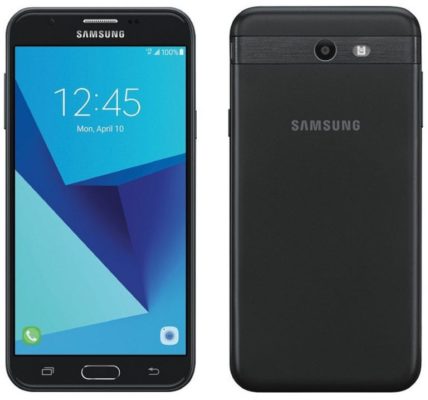 As stated earlier, the above specifications are products of rumors and cannot be confirmed until the smartphone is officially announced. Therefore not 100% of the details are correct.

The Samsung Galaxy J7 2017 will come in Gold, White and Black colours, and is expected to be announced in March, even though some sources say it will be announced in April.