The Chinese company Smartisan has already announced some very interesting smartphones in the market. The last to be announced was the Smartisan Nut Pro in May last year, which came with powerful technical specifications. Now the company is preparing to launch a new smartphone within the next few days, which leaked in an Antutu benchmark test.

According to what has been revealed, this new smartphone should reach the market as Smartisan Nut 2 and will have interesting technical specifications. In case, it will have a battery of 3,340 mAh, enough to ensure a day of moderate use. In addition, it will also feature 4GB of RAM and display with a ratio of 18 – 9. 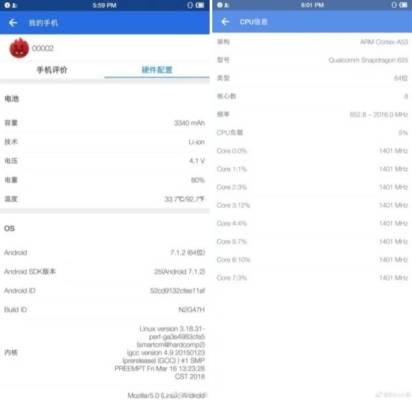 Aside the technical specifications we can also highlight that the Smartisan Nut 2 should reach the market with the Snapdragon 625 chipset, which has eight processing cores and is accompanied by the Adreno 506 GPU and should guarantee a good performance. For storage the smartphone will offer 32 GB, 64 GB or 128 GB of internal storage, with the option of expansion via micro SD card.

Apparently, Smartisan Nut 2 will be duly announced on April 9. However, the company has not yet confirmed this information and because of this it is necessary to wait for the official pronouncement of the company. Prices will range from $ 252 to $ 315 to the more expensive version. There will also be a variant that will cost $ 284 ($ 937, in direct conversion).