The cold season is coming and it is better to start looking around to look for video games for Android and iOS to have fun during the winter. To prepare for the eventuality, we have taken a look at what can be the games of the moment, apps to entertain you whenever you’re bored and have your faithful smartphone at your fingertips.

Video games for Android and iOS? Here is a list of our faithful winter companions!

In recent years, the video games market on mobile has experienced a true golden age – now we can say that the video game products designed for these platforms have little to envy console and PC. Here are some of the most important titles of this end 2018.

Hungry Dragons is not an absolute novelty – this game is, in fact, available for several months on iOS, but for Android, it is a welcome new entry.

This is a particularly simple game, in which you will have fallen into the shoes of a dragon in search of food (fish, various animals, and even human beings!). The lively graphics, the gradual progression of the character and the relative simplicity of play, make Hungry Dragons the ideal pastime to have on your smartphone!

Do you particularly appreciate the Warhammer 40,000 setting and do you have a soft spot for card games? The Horus Heresy – Legions could be a good choice as a pastime.

A valid alternative to Hearthstone, this title compares the various factions of Space Marines, offering both single and online gameplay. If you like to build card decks and have fun in a fast and balanced game, The Horus Heresy is the right choice.

What’s better than a good strategic title to relax your nerves? Valleys Between is a turn-based game in which we will move through a map made up of hexagons. It is a sort of God Game (vaguely referable to the classic Populous).

Relaxing maybe … easy definitely not! After the first levels, the difficulty will increase rapidly and the challenge will become challenging, to say the least. If you prefer the use of talent and the finest strategy to action, Valleys Between is for you!

Do you have a fix for the engines? Modern mobile platforms offer a wide choice in this field. As for the end of 2018, if we want to make a name, we can mention Asphalt 9 – Legends.

Made by the well-known Gameloft developers, this title turns out to be one of the most rewarding racing experiences on both iOS and Android. The controls are extremely simple to master, with the ability to perform in spectacular leaps and drifts.

Lovers of sports managers know that November is the month of Football Manager. But if you are mobile gamers, what is the most suitable alternative? New Star Soccer Manager, in its small way, can be a rather exciting title.

Town of Salem (Android and iOS)

Four years after being released on PC, Town of Salem also lands on the mobile platform. This is an extremely interesting title that involves 7 to 15 players, divided into 3 factions and different classes.

Every single participant has a goal and will have to deal with the others to the sound of lies, subterfuges and psychological strategies to get it … do not expect a noteworthy graphic, given that Town of Salem is based exclusively on the atmosphere and interactions with other players . In spite of this, the title can be really exciting … even if it is almost essential to know at least a minimum of English. 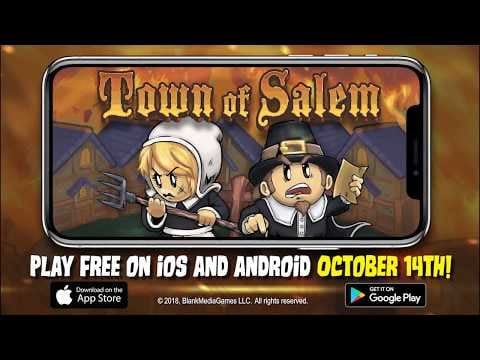 We end the roundup of games with a title dedicated to Wrestling. Rowdy Wrestling is definitely not a game with high-end graphics (which is why it can also run on older devices) but it offers a lot of fun.

The title in question, of course without official licenses, is a sequel to Wrestling (Colin Lane game) and allows players to test themselves as a fighter in the famous sport / show discipline so famous in America. All this is limited to swinging an arm and trying to take the adversary slaps – a bit ‘stupid and chaotic, but still fun.

To be noted the presence of a career mode during which the player will have to climb the world rankings – a feature that gives a bit of depth to a title that still makes immediacy and sympathy its best features.