The Chinese smartphone manufacturer, Gionee is in no way relenting after the launch of its most expensive smartphone, the Gionee M2017, the mid-range Gionee Steel 2, and the recently released Gionee Marathon M6 Mirror that passed through the Chinese telecommunication authority TENAA. Now another Gionee smartphone dubbed Gionee A1 has surfaced in new leak revealing the device image and some of its technical specifications. 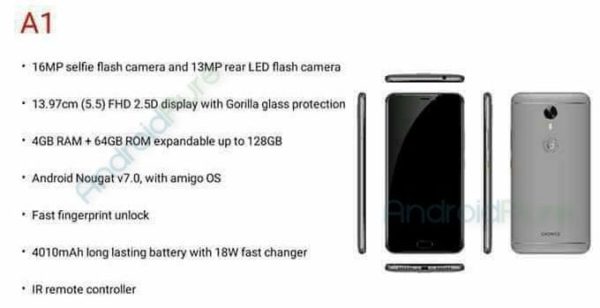 The new Gionee A1 is going to be the first A-series smartphone from Gionee if the leaked image is correct. The leak also specified some of it features starting from its body design; Gionee A1 sports a metal uni-body design that packs a Full HD 2.5D curved screen display that measures a dimension of 5.5-inch (1920×1080 pixels) protected by a Gorilla Glass.

Furthermore, the leak also reveals that the Gionee A1 is powered by a 1.8 GHz Octa-core processor, along with 4GB of RAM. Has an inbuilt storage capacity of 64GB, which cane be further expandable up to 128GB via microSD card. The device boots Android 7.0 Nougat operating system based on Gionee’s Amigo OS 4.0.

The phablet device is juiced by a 4010 mAh battery along with an 18W charger which indicates support for fast charging.

Based on the camera configurations of the Gionee A1, the phablet device comes with a massive 16-megapixel front snapper with LED flash for selfies and video chats, the rear side of the device sports a 13-megapixel camera with LED flash. This smartphone is no doubt a selfie focused device targeted at all selfie lovers.

As per leaked information, the Gionee A1 smartphone is said to come with a fingerprint sensor that is embedded in the front home button for fast unlock and also carries an IR remote controller which can be used to operate audio, video and other electronic equipment within a room using light signals. Other connectivity options include 4G LTE, Wi-Fi 802.11 b/g/n, as well as a hotspot.

Finally, there is no official information on the global price of the Gionee A1 as it is yet to be made available. Also, the launch date is not definite yet. You may take this leak with a pinch of salt. We shall, however, keep you updated on the latest info on this Gionee A1 smartphone as it is rolling out.